The standard particle modifiers in Cinema 4D can all be used with X-Particles. In addition, X-Particles ships with a large number of additional modifiers. Some of these are similar to those supplied with Cinema 4D, though with the difference that they can be controlled with the X-Particles control system. Most are new and have no equivalent in the Cinema 4D particle system.

The modifiers can be used in two different modes. In each modifier, the mode is selected with the ‘Mode’ drop-down, which has two entries.

In this mode, the modifier works exactly as a standard Cinema 4D modifier. Whether a particle is affected or not depends only on whether it enters the field of effect of the modifier. All modifiers are initially set to this mode when first added to the scene.

This is a very powerful mode because unlike independent mode it enables specific particles to be affected by the modifier. You can have multiple modifiers of the same type in the scene, and use Actions to ensure that only specific modifiers of that type affect the particles.

For more details on how to control modifiers with Actions, please see the Action object page.

Most (not all) modifiers support the conventional Cinema 4D falloffs. Some also support an additional falloff mode in which the effect of the modifier is also influenced by the particle age. In all cases the interface looks like this, as seen in the Gravity modifier (the screenshot is from Cinema 4D R21 so shows the Fields display, this will look a little different in R19 and earlier): 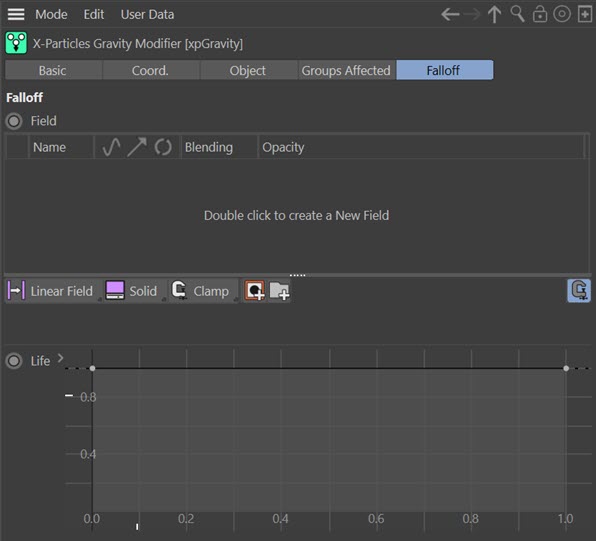 By adjusting the spline the effect of the modifier will vary with particle age. Values from the left of the spline interface are for newly-created particles while on the extreme right particles on the point of death will be affected. The default setting has no effect; if the value is zero the modifier will not act on the particle at all, while if it is negative, the effect will be inverted.

This feature is deprecated in the current version as data mapping replaces it. It will be removed in a future version of X-Particles.

Note that nonsense values are ignored. For example, you cannot set a negative value for the number of particles to be emitted using a spawn modifier!

X-Particles includes additional falloffs that can be used with any object in Cinema that can use falloffs.

All modifiers have one other common control, the ‘Enabled’ switch. Checking this switch enables the modifier; unchecking it disables it, just as if you clicked the green tick in the object manager to change it to a red cross. It is there for convenience.

The current modifiers supplied with X-Particles are listed below. They are divided into four groups: