This modifier enables you to move particles to form a whirling vortex, making the creation of tornadoes, etc. very simple.

Please read the section 'How to use the Vortex modifier' before using it for the first time. 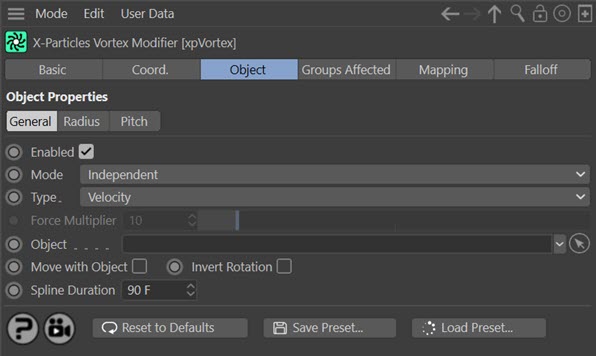 This mode causes the particle to move in a perfect helix. You can control the radius and amplitude of the helix from the controls which appear when this mode is selected - see below.

If this field is clear, and you are emitting directly from an emitter rather than an object, the vortex axis is along the Z-axis of the emitter. If you drop an object into this field, the vortex axis will be along the Z-axis of the object in the field. If the object is not at the same location as the emitter, or has a different rotation, the particles will move in a (possibly large) circle around the linked object. This can be a useful effect if required.

If you are emitting from an object, it is recommended that you drop the emission object into this field. If you don't, the axis of the vortex will be along the Z-axis of the emitter. If the emitter is not at the same location as the emitting object, or has a different rotation, the particles will move in a (possibly large) circle around the emitter.

If you are emitting from an emitter (not an object) and you move the emitter, what happens? New particles are generated from the emitter position but existing ones stay where they are. This isn't very good if you want a tornado to move over the ground, so check this switch to make the existing vortex move with the emitter. In this case, make sure the 'Object' field is clear.

If you are looking along the vortex axis from the emitter (or emitting object) the particles travel in a counter-clockwise rotation. To make it clockwise instead, check this switch.

This is the length of time over which the radius and pitch splines extend. The longer the time, the more gradual the change in radius and/or pitch.

When 'Type' is set to 'Helix', the interface changes to this: 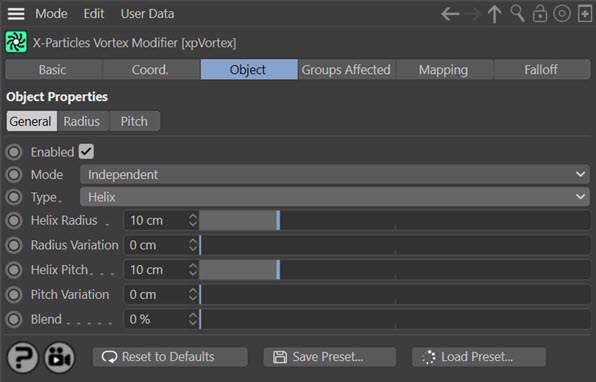 With this mode, the particles move in their own individual helix pattern.

This parameter sets the radius (i.e. the amplitude) of the helix.

With this setting you can add variation to the radius for different particles.

This sets the pitch (i.e. the wavelength) of the helix.

With this setting you can add variation to the pitch for different particles.

This setting lets you blend the particle's current direction of movement with that calculated for movement in a helix. You can use this to blend the helix effect with movement generated by other modifiers. To do that, make sure that the helix is the lowest of all the modifiers in the object manager. Modifiers are carried out for each particle in the order found in the object manager, so this will let other modifiers (such as Wind or Turbulence) alter the particle movement, then apply a helical component to the result.

If the value is set at 0%, there is no blending and the helix takes over completely. At 100% there is no helical effect at all and the existing direction is followed without change. 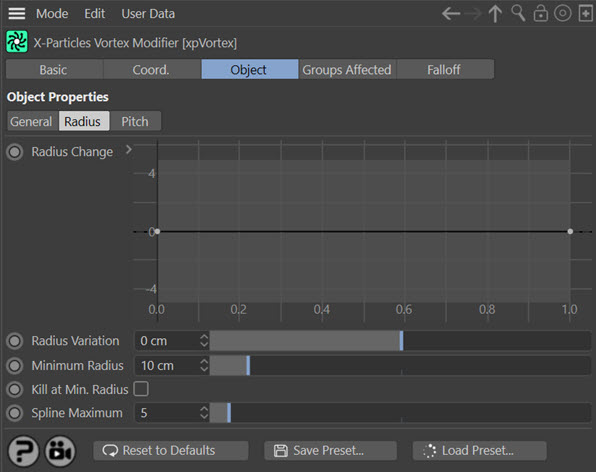 This spline governs the rate of change of the vortex radius. It is not an absolute setting for the radius - see 'How to use the Vortex modifier' below.

Adding variation to the change in radius will add some 'thickness' to the vortex and make it more realistic.

If you reduce the radius using the spline, you can set this value, which is the minimum radius the vortex can have. Note that if set to zero, the particles will never start to expand outwards after being generated.

If checked, this switch will cause the modifier to kill any particles which reach the minimum vortex radius. 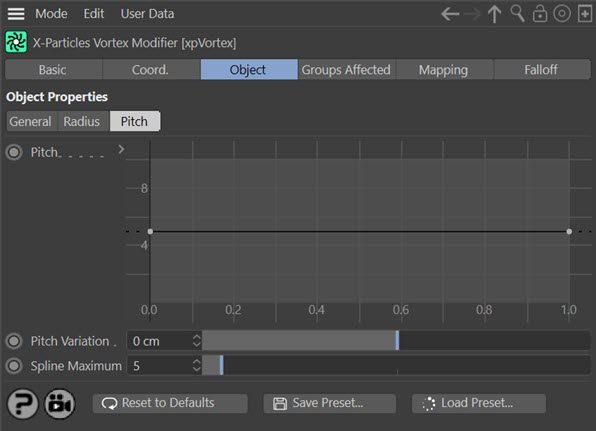 This spline governs the pitch of the vortex - how fast the particles move along the axis of the vortex. Unlike the radius spline, this is an absolute setting.

This setting enables some variation to be added to the pitch for each particle.

How to use the Vortex modifier

How you emit particles will have a major effect on the result. For a nice vortex, try emitting from an emitter with a Circle shape, and turn on 'Ring Only' in the emitter so that particles only emit from the edge of the circle. You could also try emitting from a Disc primitive with a wide Inner Radius to give a thin ring of polygons; that will give some 'thickness' to the vortex.

Therefore, if you are emitting from an object, we recommend that you do the following:

If you find that the particles are rotating around the wrong axis, make sure that the axis of rotation (i.e. the object's axis) is aligned correctly and that the modifier is linked to it. The object's Z-axis should point along the initial direction of travel of the particle stream.

The default behaviour of the modifier is to move the particles in a circle. That's not very exciting because for a tornado you want the particles to travel in a spiral shape. To get the shape you want, the modifier has two controls, Radius and Pitch.

To make the particles expand their radius to produce a typical vortex cone shape, set the spline to return a positive value. If set to always return 1, for example, the radius will increase by 1 scene unit per frame. This is a very gentle change but a value of 5 will increase the radius dramatically. You can have different rates of change at different times by adding more spline points and/or changing the spline point tangents. For example you might set the value at the start to be 5, then later on change to zero. Remember, this won't give a radius of zero, it will stop the from radius increasing. You can have negative values in the spline to shrink the radius over time; if you do that, you can use the 'Minimum Radius' setting to prevent the vortex radius from shrinking right down to zero, if you need to.

The Pitch is how fast the particles move along the axis of the vortex. A value of zero will result in the particles moving only in a circle (the radius of which is set, or changed by, the Radius controls).

Higher values make the particles move faster. Again, you can use the Pitch spline control to adjust the speed, so you can have fast movement at the start and slow at the end.

Getting the exact shape you want will probably take some trial and error. When you do, you might want to save it as a preset so you can easily recreate it.