This action gives control over a History modifier. 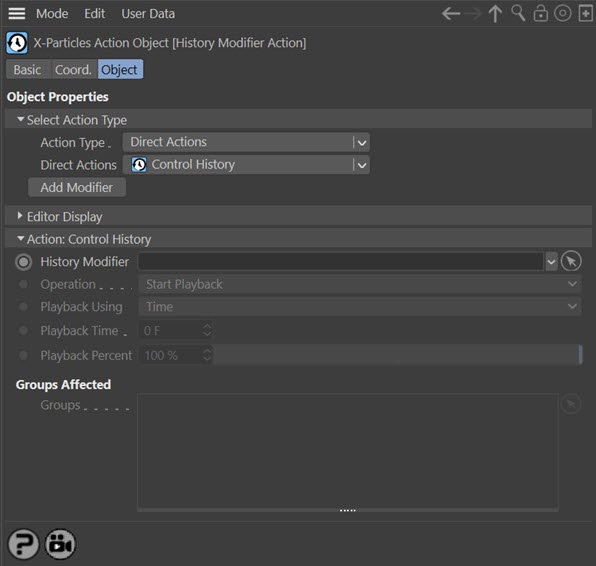 This field accepts a History modifier which you drag into the field from the Object Manager. Without a linked modifier, you cannot access any of the other parameters and the Action will have no effect. In addition, in the modifier's interface the Mode parameter MUST be set to 'Action-Controlled'. If it is set to 'Independent' the modifier will simply work on its own like any of the standard Cinema 4D modifiers and the Action will have no effect on it.

This drop-down menu controls what happens when the action is triggered. It has two options:

This will cause the linked History modifier to start playing back recorded data. This will continue either until all the history has been played back, or until another action is used with 'Operation' set to 'Stop Playback'.

This option will cause the linked History modifier to stop playing back data. If the modifier was not playing back the history when this action is triggered, it will have no effect.

Note that the following parameters 'Playback Using', 'Playback Time' and 'Playback Percent' are identical to the parameters with the same name in the History modifier.

The length of the playback in frames or other time units, if 'Using Time' is selected in 'Playback Using'.

The length of the playback as a percentage of the total history stored by the particle, if 'Using Percent' is selected in 'Playback Using'.