This object enables you to track whether an emitter (or some other object) is inside or outside the volume of an object and if so either emit or stop emitting particles. Multiple objects can be tested by the same Volume Emission object.

Note: this will only work if closed polygon objects are used. For example, a sphere or cube is fine but a plane or disc primitive would not work. 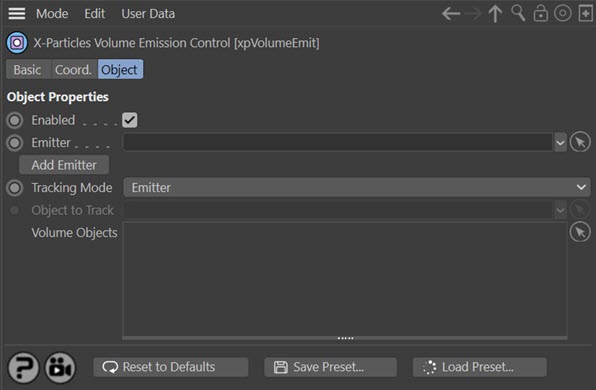 Uncheck this switch to stop this object from working.

Drag the emitter you want to track into this link field. If the field is left empty, nothing will happen.

In this mode the emitter is tested directly to determine if it is inside or outside the volume of the objects in the 'Volume Objects' list.

In this mode the emitter itself is not tracked but some other object is tracked instead; the emitter will emit (or stop emitting) if that object is inside or outside the volume of the objects in the 'Volume Objects' list.

Only available if 'Tracking Mode' is set to 'Object'. Drag the object you want to track into this link field.

This list contains all the objects whose volume will be tested to determine if the emitter, or other tracked object. is inside or outside the object. Drag the various objects you want to test into this list.

Each object has a flag which affects the result: