This modifier simulates growth patterns. It is modeled on the idea of an infection spreading from one particle to another, but you can use it for any kind of growth.

The modifier is derived from a Python script originally written by Toma Bogdan. We are very grateful to Toma for allowing us to use his script in this way.

The modifier has the following sections: 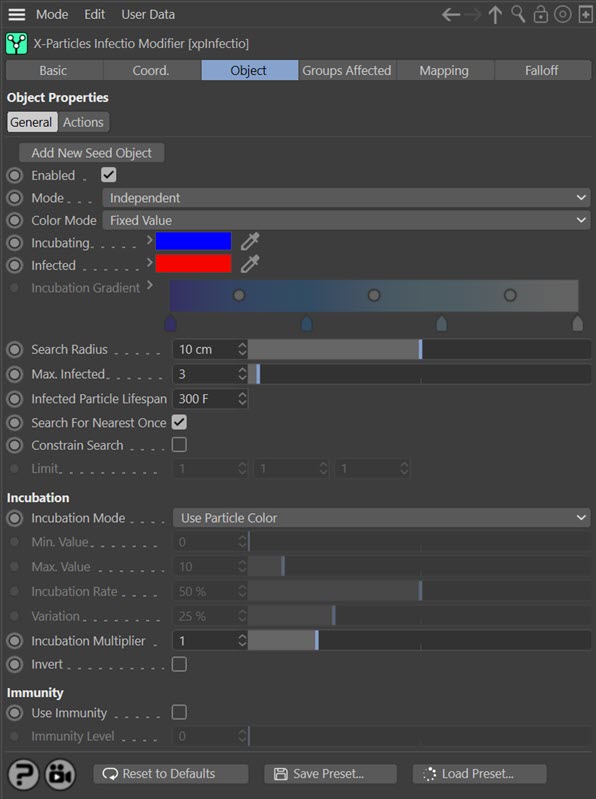 Please see 'Using the Infectio Modifier' before using this modifier for the first time. You will find important information about setting up the system and more explanation of some of the terms used in the reference below.

Click this button to create a new X-Particles Seed Object and add it to the scene as a child object of the Infectio Modifier.

Note that without at least one seed object the modifier will not work and all the parameters will be disabled until a seed object is added.

If this button is unchecked, the modifier will be disabled (inactive).

In this mode, particles will be affected if they come into the field of effect of the modifier. X-Particles Actions have no effect on the modifier in this mode.

This drop-down menu controls what will happen to the particle colour when it changes from the uninfected to incubating, and from incubating to infected. The options are:

Drag the groups to use into the two fields or use the 'Add Group' buttons to create new groups. The emitter does not need to emit either group (in fact it should not do so).

Note that you must supply both groups. If either is missing, the colours used in the 'Fixed Value' mode will be used instead.

The colour to use for particles in the incubating phase when 'Color Mode' is set to 'Fixed Value'.

The colour to use for particles in the infected phase when 'Color Mode' is set to 'Fixed Value'.

The gradient to use when 'Color Mode' is set to 'Gradient'.

The group to use for particles in the incubating phase when 'Color Mode' is set to 'Use Groups'.

The group to use for particles in the infected phase when 'Color Mode' is set to 'Use Groups'.

Note that this replaces the 'No Color Change' switch in previous versions of X-Particles. Existing scenes which have this switch checked will automatically set this parameter to 'No Color Changes' when loaded.

This drop-down menu controls the colour change which normally occurs when a particle's group is changed. The options are:

The colour will always change when a particle's group is changed.

A colour change will only occur when a particle changes group on changing from uninfected to incubating.

A colour change will only occur when a particle changes group on changing from incubating to infected.

Even when a group changes, the colour will not change.

This switch has been replaced by the 'Group Color Change' parameter and is no longer available. Existing scenes which have this switch checked will automatically set this parameter to 'No Color Changes' when loaded.

Only available if 'Color Mode' is set to 'Use Groups'.

If you change particle groups, all the particle parameters contained in a group will be changed. If you would prefer that the colour did not change, check this switch. Note that all other parameters will still change.

Clicking either of these buttons will create a new particle group and add it to the respective link field.

When a particle becomes infected, its lifespan will be set to this value. You can use this to kill infected particles after they become infected, which can lead to some interesting effects. The default is 10 seconds (300 frames at 30 fps) which is longer than many scenes, but you may need to increase this for lengthy scenes if you don't want the particles to die, or decrease it if you do want them to die.

Search for Nearest Once

By default the search for uninfected particles takes place in all directions around an infected particle. If you check this switch the 'Limit' setting becomes available.

Only available if 'Constrain Search' is checked. Use this setting to restrict the search for uninfected particles along the X, Y and Z axes. The default is a value of 1 for each axis, which represents no limit. Smaller values restrict the search along that axis.

This menu determines how the incubation value for each particle is set when it is first generated. The options are:

With this option the incubation rate is set from the 'Incubation Rate' value. You can use this to give all particles the same incubation rate, or you can add some variation by using the 'Variation' setting.

As an example, suppose the particle radius can vary between 1 and 2 screen units. You might set the 'Min. Value' setting to 1, and the 'Max. Value' setting to 2. This ensures that the largest particles incubate the fastest, while the smallest ones don't incubate at all. if you want the smallest to incubate but only very slowly, you could set the 'Min. Value' to something like 0.9. You can see that these two settings are crucially important when determining how fast particles incubate and therefore how fast the spread proceeds.

The same as for 'Particle Radius' or 'Particle Mass' but using the physical data settings instead.

The settings to use to determine incubation rates when 'Incubation Mode' is set to 'Particle Radius', 'Particle Mass' or the physical data parameters.

The settings to use to determine incubation rates when 'Incubation Mode' is set to 'Set From Incubation Rate'.

You can also use values less than one if the simulation is progressing too quickly and you want to slow it down by reducing the incubation rate.

If this switch is checked, the calculated incubation rate is inverted. This would cause (for example) particles with the brightest colour to have the slowest incubation rate.

Check this switch to enable the 'Immunity Level' setting.

With this setting, you can make some particles immune to infection. The setting is measured against a particle's incubation rate. Those particles with an incubation rate lower than this value will never be infected - in fact, they will not even enter the incubating phase.

These actions will be triggered when the particle first changes from the uninfected state to the incubating state.

These actions will be triggered when the particle first changes from the incubating state to the infected state.

This modifier simulates growth systems in X-Particles. It uses a classic paradigm of an infection spreading from one point to another, but it is really a general-purpose growth simulator. With it you can obtain simulations like this:

The most important thing to remember about this modifier is that it does NOT generate any new particles. Instead, it works by changing the state of a particle from one phase to another. The three possible phases (again, using the concept of a spreading infection) are:

Setting up the growth system

1. The first stage is to generate some particles. Best results are often obtained using a single shot of particles, but you can emit new particles every frame, if you wish. Particles can be emitted however you like, there are no restrictions.

It is recommended that you start with a single shot of particles and set their speed to zero so they remain in the same location. When you are familiar with the modifier you can start to experiment with different emission types and particle movement.

3. At this point, all particles are uninfected so no spread will take place. To start it off you need to provide a seed point - a point at which there are some infected particles which can infect others. You do this by adding an X-Particles Seed Object. If this object includes some particles in its sphere of activity, they will be changed to infected and the process will start when you run the animation.

4. You can also add a Trail object to show links between infected particles, as shown in the above animation. There is more information on how to do this in the Trail object page.

5. The advantage of using groups is that, as was done in the above animation, you can use the X-Particles material to render only the groups for the incubating and infected phases. This enables you to not render the original particle distribution if you don't want to. If you use the other colour options, the original particles will also be rendered.

Using Infectio with a Color modifier

The solution to this is a new switch in the Color modifier - 'Change on Birth Only'. This will cause the particle colour to be set on birth but the colour will not be changed by the modifier in any subsequent frame. This enables colour changes made by the Infectio modifier to be seen.

The other option in the Color modifier is 'Store Colour Brightness'. This will cause the overall colour brightness to be stored in the particle data whenever its colour changes. You can use this value in other areas of X-Particles, such as data mapping.

For the simulation to work, there must be at least one infected particle to act as a 'seed', start the simulation off, and infect other particles. You can add seed particles by adding an X-Particles Seed Object.

This means that there MUST be at least one seed object in the scene. You can have as many as you like, but ALL seed objects must be child objects of the Infectio modifier. Also, when the simulation starts there must be one or more particles within the sphere of activity of the seed object. If there are no particles inside that sphere, either move the seed object or increase its size.

Note that you can add a seed object by clicking the 'Add New Seed Object' button in the modifier.

You can do this by using a Trail object and selecting the Infectio algorithm.

That's really all you need to do to set up the system. You can then refine it by specifying colours or particle groups if desired, or add a Trail object to create links between infected particles.

The key to getting a good result is in deciding how the infection, or growth, will spread. This is determined by the particle's initial incubation time, so setting this up as required is essential. Good results are obtained with a texture controlling the initial particle colour and setting the incubation rate from that, but if you don't want to use colour you can try one of the other parameters such as mass or radius. Setting the mass, for example, will not affect many other components of X-Particles, and you can leave the particle colour unchanged if that's what you need.