The Planar Mesher object takes a particle stream and adds polygons (triangles) between particles depending on the closeness of particles to one another. It uses exactly the same algorithm as the Trail object 'Nearest by Distance' connection mode, so if you wish you can use the two objects together. 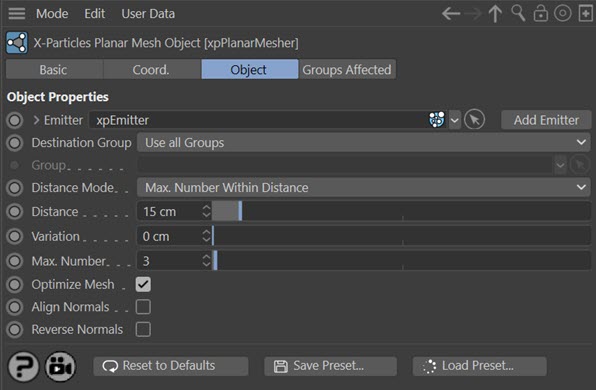 For the 'Groups Affected' tab, and for the buttons at the bottom of the interface, please see the 'Common interface elements' page.

Drag the emitter the object will use as the particle source into this field.

This lets you select which particle groups are used in making the connections. The available options are:

Each particle will connect to every other particle which is closer to it than the value given in the 'Distance' setting. Increasing that value will result in more connections because more particles will be within that distance.

This is the same as 'All Within Distance' except that you can use the 'Max. Number' setting to limit the maximum number of connections. For example, if this is set to 5, and there are 10 particles within the threshold distance, connections will only be made to the 5 closest particles.

This is the maximum distance between two particles which will become one edge of a possible triangle. The lower this distance the fewer triangles will be generated, since there will be fewer pairs of particles which are that close together. You can add some variation for different particles by using the 'Variation' setting.

This is the maximum number of connections to use when 'Distance Mode' is set to 'Max. Number Within Distance'.

If this switch is checked, the generated mesh will be optimized to remove unused points, duplicate points, etc. This is the same as using Cinema 4D's 'Optimize' command with the default values.

Normally you should leave this switch checked. If you add thickness to the mesh using a Cloth object or some other method (this is not recommended but the option is there) you may need to uncheck this switch. Doing so will avoid jumps in the mesh size as the polygon count changes but will result in a poorer-quality mesh.

If this switch is checked, the normals of the resulting mesh will be aligned. This is the same as the 'Align Normals' command in Cinema 4D. Note that with large numbers of particles this may slow down object generation.

If this switch is checked, the normals of the resulting mesh will be reversed. This is the same as the 'Reverse Normals' command in Cinema 4D. Note that with large numbers of particles this may slow down object generation.

This is a simple mesher which generates geometry between three particles, using the distance mode settings described above. Since the algorithm is the same as the Trail object (in 'Nearest by Distance' mode) you can generate and texture the geometry then render the splines from the Trail object to give an outline to the triangles.

The mesher does not produce a closed mesh, nor does it produce a mesh with volume like the Skinner. The sort of results you get might look like this: 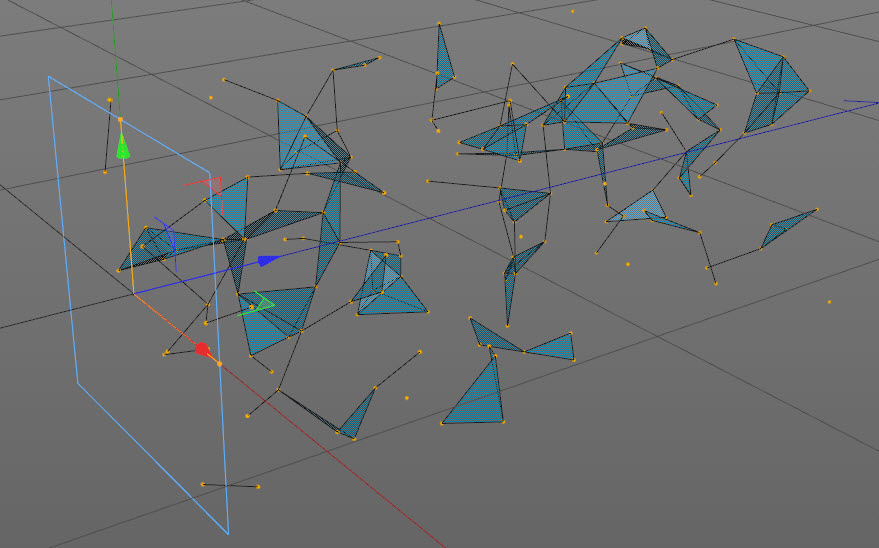 This shows the Trail object outlining each polygon. In this example, the X-Particles Distance Shader is also being used to fade out the polygons the further they get from the world centre.