If you want to see collisions between particles, as opposed to collisions with a scene object, add this object to the scene. 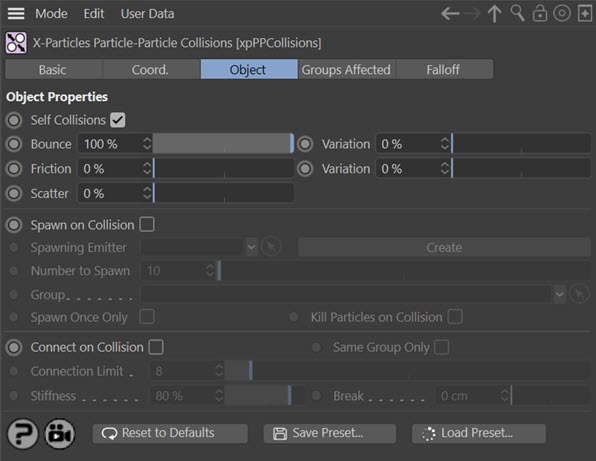 If checked, particles will collide with other particles from the same emitter.

These settings are identical to the same parameters in the Collider tag. Please refer to the tag for details.

Drag an emitter into this field; this emitter will be used to generate the new particles. As explained in the Spawn modifier page, it is NOT a good idea to use the same emitter which is producing the particles which collide and trigger the spawning. Use a different emitter instead. When you drag an emitter into this field, the 'Emitter Only Spawns' switch in that emitter will be turned on automatically. If you really need it turned off, you can do so manually.

Click this button to create a new spawning emitter and add it to the link field.

This is the number of particles to be spawned on collision.

If this switch is on, the emitter will only spawn once from a collision between two specific particles. After that, neither particle will spawn again unless in collision with another particle which hasn't yet spawned.

If this switch is checked, both the colliding particles will be removed from the scene (this doesn't stop you from spawning new particles from the collision).

If this switch is checked, when two particles collide a connection will be made between them. You can see these if you turn on 'Display Constraints' in the Display tab of the emitter.

If this switch is checked, particles will only connect with particles they have collided with if both particles are in the same group.

This is a limit on the number of connections each particle can make. Too many connections can dramatically slowdown playback in the scene.

This is a measure of how "strong" the connection is.

To restrict particle-particle collisions to certain particles, simply create however many particle groups are required and drag the particle groups to be affected by the object into the 'Groups' list in the 'Groups Affected' tab.

You should be aware that if you have a large number of particles close together, it may seem as if some particle-particle collisions are being missed. Consider the situation with three particles close together. In a particular frame, particles 1 & 2 collide and particle 2 is given a new direction. It doesn't actually move anywhere yet, the movement of a particle is calculated at the end of the frame when all the influences on a particle, such as modifiers and collisions, have been taken into account. Before then though, suppose a collision between particle 2 and 3 is also detected. Particle 2 then is given a different direction, overwriting the one from the previous collision. Looking at the animation it would seem as though the first collision had been missed and only the second one detected.