The Kill Modifier provides a way to force particles to stay within certain bounds. Those which stray outside the defined boundary will be killed.

Here is its interface: 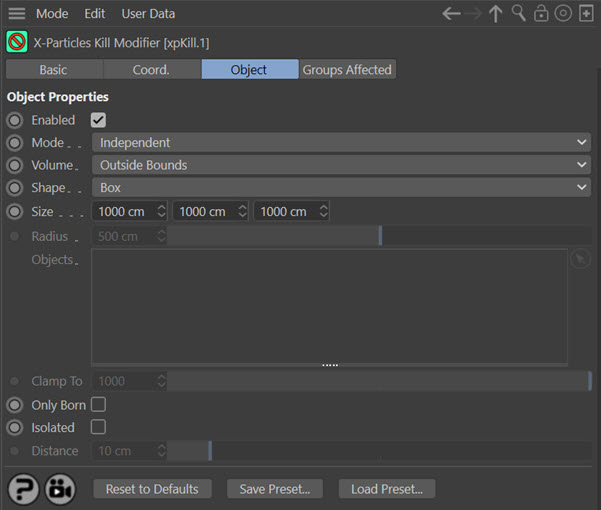 For the 'Groups Affected' tab and for the buttons at the bottom of the interface, please see the 'Common interface elements' page. This modifier does not have a Falloff tab.

This defines the nature of the bounding volume.

The particles will be killed if they are inside the modifier's boundary (shown as a yellow box or sphere).

The particles will be kiiled if they are outside the modifier's boundary (shown as a green box or sphere).

One or more objects can be dragged into the modifier's Objects list. The effect depends on the flags which are set for each object.

In this mode particles are killed if they are outside the field of view of the current camera (note: this will only work correctly with Perspective cameras).

With this option, the modifier will remove any particles exceeding the limit you specify. There is no falloff or boundary in this mode as it applies scene-wide to restrict the maximum number of particles for any emitter it affects.

The maximum number of particles permitted is set in the 'Clamp To' parameter.

The shape of the modifier, either a Box or a Sphere. Only applies when 'Volume' is set to 'Inside Bounds' or 'Outside Bounds'.

The size of the object when 'Shape' is set to 'Box' (not available in Objects or Camera modes).

The size of the object when 'Shape' is set to 'Sphere' (not available in Objects or Camera modes).

This is a list of bounding objects. Each object in the list (which must be a polygon object of some kind) has two flags.

The object will only act as a bounding object if the green tick is present. It is disabled if it has a red cross.

In this screenshot the Cube has the Outside flag, while the Sphere has the Inside flag:

This is only available if 'Volume' is set to 'Clamp to Max. Particles'. If the total number of particles belonging to an emitter exceeds this value, particles will be removed to bring the number down to this limit.

If this switch is checked, only newly-created particles will be killed. This is ideal for positioning an emitter to give an already filled volume and killing all new particles outside the volume on birth.

Checking this switch will kill particles which are isolated from other particles. The main purpose of this switch is in fluid simulations, to permit the removal of stray fluid particles. You can set the distance at which a particle is considered to be isolated in the 'Distance' setting.

Only available if 'Isolated' is checked. It is the distance from other particles at which a particle is considered to be isolated and will be killed.