For more details, see the section 'Using the Sprite Shader' below.

This is the shader's interface: 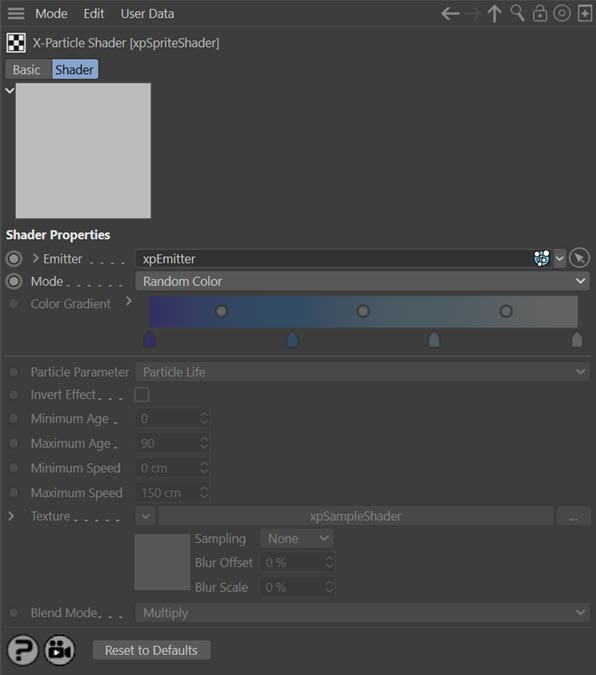 Note: although we talk about colour in the details below, remember that this shader can also be used in channels such as transparency, bump, displacement, etc.

This link field accepts an X-Particles Emitter which you drag in from the object manager. The shader obtains data on particle age, etc. from this emitter, so without it you cannot make any changes to the shader. If placed in the colour channel the shader will render sprites white in the absence of an emitter.

The sprites will have the same colour as the particle. This is particularly useful if the particles were emitted from a texture and took their colour from that texture.

The sprites will each have a randomly-selected colour.

This option will enable the Color gradient and will randomly colour the sprites using a colour taken from the gradient.

Sprites will be coloured using colours taken from the Color gradient, the colour depending on the particle parameter selected.

In this mode the color values are set by the Sprite Shader modifier. For more details, see the explanation below.

The colour is chosen from this gradient when 'Mode' is set to 'Random (From Gradient)' or 'Parameter-Dependent'.

This enables you to select the parameter used for determining the colour from the Color gradient. There are five options:

This is a simple cutoff switch which changes the particle colour when it reaches the age give in the Minimum age setting (see below). As an example, if you had a blue-to-white gradient, and entered '40' into the 'Minimum Age' field, particles with an age of less than 40 would be coloured blue, while those of age 40 or above would be coloured white. There is no transition, just a one-step change.

This is similar to Particle life, but instead of the colour changing over the entire life of the particle, the colour changes between the values in the Minimum age and Maximum age settings. So with the blue-to-white gradient, if 'Minimum Age' is set to 30 and 'Maximum Age' to 60, all particles with age under 30 would be blue, all particles aged over 60 would be white, and those from 30 to 60 would be coloured with a colour from the gradient depending on their age.

Similar to 'Age Range' but using speed instead. The speed range is obtained from the 'Minimum Speed' and 'Maximum Speed' values.

Used for the Age and Age Range parameters (see above).

Used for the Speed and Speed Range parameters (see above).

This is only available when the Parameter-Dependent mode is selected. You can put any other Cinema 4D channel shader, or a bitmap, in here. The colour returned from this shader or bitmap will blend with the Gradient color according to the Blend mode setting.

A common way of using this setting is to set the Gradient color to a black-to-white gradient and the Blend mode setting to multiply. This will cause the colour to get brighter as the particle ages (if you chose the Particle Life parameter, for example). If you just want to use the colour from the texture without blending with the gradient, just set the gradient to be plain white and Blend to multiply. But then, of course, you lose all the parameter dependent effects so you needn't have bothered with the sprite shader in the first place!

This setting selects how the Texture blends with the Color gradient. There are three modes, which are the same as in other Cinema 4D shaders:

This shader gives you extensive control over the material applied to a sprite. It does this by varying the colour (or transparency, or whichever channel you choose) according to selected attributes of each particle.

For example, you can easily change the sprite colour over the particle’s lifetime, or change its transparency over a specified age range, or its alpha channel when a particle exceeds a certain speed.

To use the shader, add it to any material channel which can take shaders. You will find it in the ‘X-Particles’ sub-menu in the material editor interface's shader list. You can also add it to a Cinema 4D Layer or Filter shader or any other shader you like.

Because the shader depends on data from the particle emitter which is not available until the animation is played, the particles will appear white in the editor; the colours used will only appear when each frame is rendered.

Using this mode can be a little confusing. What happens is that the Sprite Shader Modifier changes the colour value to use, but it needs to be set up correctly in order to work

Assume you have a scene with a sprite object, a material applied to it with a Sprite Shader in the Color channel, mode set to 'Modifier Sets Value' and a Sprite Shader Modifier in the scene with the mode is set to 'RGB'. When you play and render the animation, the sprites will be plain white with no colour change over time. Why?

The default colour set by the Sprite Shader is white. The modifier will, by default, increment the colour. However (again by default) the colour is clamped to white in the modifier. Since the sprite colour is already white, nothing happens. In the modifier, now set the Green and Blue rates of change to zero, and the Red to -2%. Then set 'Clamp To' to black. When you render, you will see that the sprite colour changes from white to cyan, as the red is reduced to zero leaving only green and blue.

If you want to set the rates of change to a positive value, to have any effect the colour must start out less than white. So, change the Red rate of change to 2%, change the 'Clamp To' colour to white, and in the Sprite Shader add a Color shader to the 'Texture' slot. Set this colour to black. This will mean that the sprites start black, and the red component increases so that the sprites turn bright red.