This modifier implements a number of 'strange attractors' which can produce some interesting results. A typical result might look like this with the Lorenz attractor: 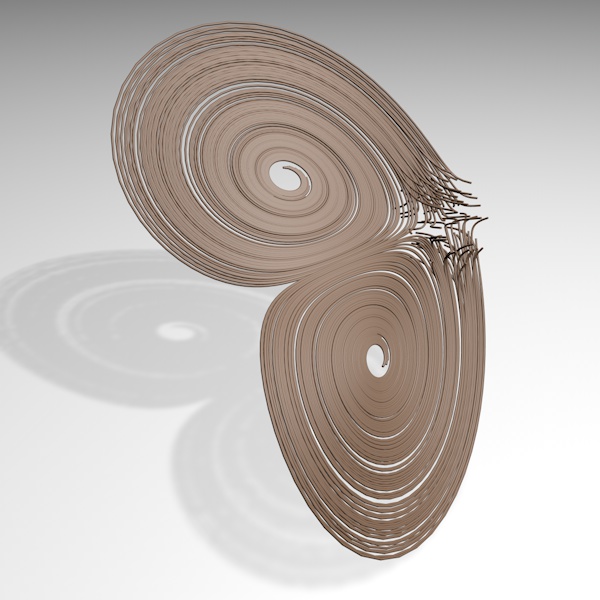 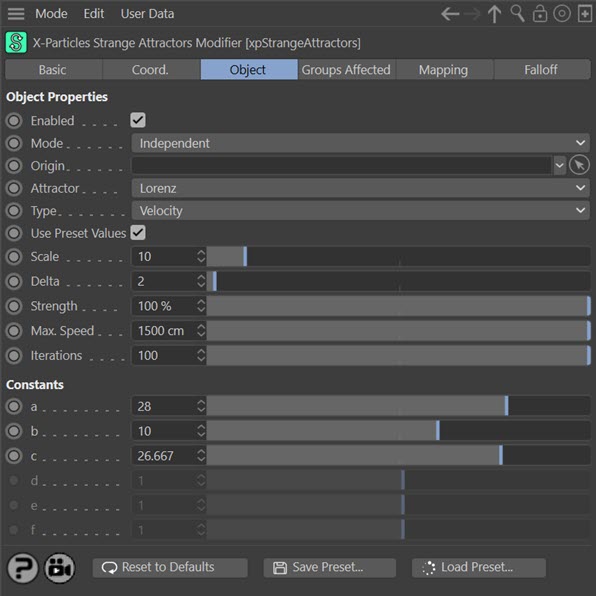 For the 'Groups Affected' and 'Falloff' and tabs and for the buttons at the bottom of the interface, please see the 'Common interface elements' page.

Please also see the 'Hints and tips' section below.

This is a link field for an object in the scene. If used, the movement of the particles will be affected by the position and rotation of the object. You can use it, for example, to change the orientation of the generated result.

This is entirely optional and the modifier will work without a link object if one is not provided.

This drop-down lists the available types of attractor. These\s include:

You can find details of the mathematics behind these attractors on the web.

This is the default mode. Here, the modifier takes complete control of the particle movement and if you add another modifier which also influences particle speed and direction (e.g. Turbulence) you will find that it has little or no effect on the particle. If you want to see the classic shape of the strange attractor, this is the mode to choose.

In this mode the change in velocity caused by this modifier contributes to, but does not control, the final particle velocity. Adding a modifier such as Wind or Turbulence will also contribute to the final result. This is the mode to use if you want to add some other kind of movement to the particle, but it will not generate the classic attractor shape as the 'Velocity' option.

The constant values (see 'Constants (a - g)' below) have a profound effect on the result. The problem is that values which work well for one type of attractor may not work for another. If this switch is checked, whenever you change attractor type using the 'Type' drop-down, the constants will be pre-loaded with a set of values which provide a good starting point for that type of attractor.

If you don't want that to happen (i.e. you want to try the same constant values for different types of attractor) uncheck this switch.

Altering the scale will affect the size of the result. Small scales may suit some attractors while others work better with larger scales.

This is the rate of change of the parameters used by the attractor. In general the larger the delta, the faster the result is generated but the curves are coarser. Small values produce very regular curves but are slower to generate.

Due to the way the velocity is calculated, the particle speed can become high, leading to a larger-scale simulation. This setting will prevent that by clamping the speed to the value found here, but bear in mind that clamping the speed will inevitably change the result. Large-scale patterns can look very attractive so consider removing the clamp by increasing the value (e.g. to 15000 units) and see what you get.

The default value of 1500 units is fine for most purposes, but you may need to reduce it in some cases. If you increase it, you may see a larger (possibly much larger) simulation.

The number of steps used internally by the attractor algorithm. The default value of 100 is fine for almost all cases. Even large differences in this value may only result in subtle changes, depending on the algorithm.

Each algorithm uses a number of constant values in the calculations it performs. Changing these values may have profound effects on the final result! Negative values are possible, so you can try them, but do not always produce satisfactory results.

If you don't like the plane of the generated result, you can change it by using an object (such as a null object) in the 'Origin' field and rotating it around one or more axes. Note that rotating the emitter itself will have little or no effect.

This is controlled by the 'Delta' value and altering the speed in the emitter or using some other modifier to change the speed will have no effect.

Like some other modifiers, such as the Follow Spline modifier, this is a 'velocity' modifier in that it takes over control of the particle's speed and direction, unlike 'force' modifiers such as 'Wind' or 'Turbulence'. Therefore, if you want to use something like a Turbulence modifier in conjunction with this modifier, you should set the 'Type' to 'Force' rather than the default setting 'Velocity'.