This action will let you manage the spawning of particles. It can either spawn particles directly, or act by changing a Spawn modifier in the scene. 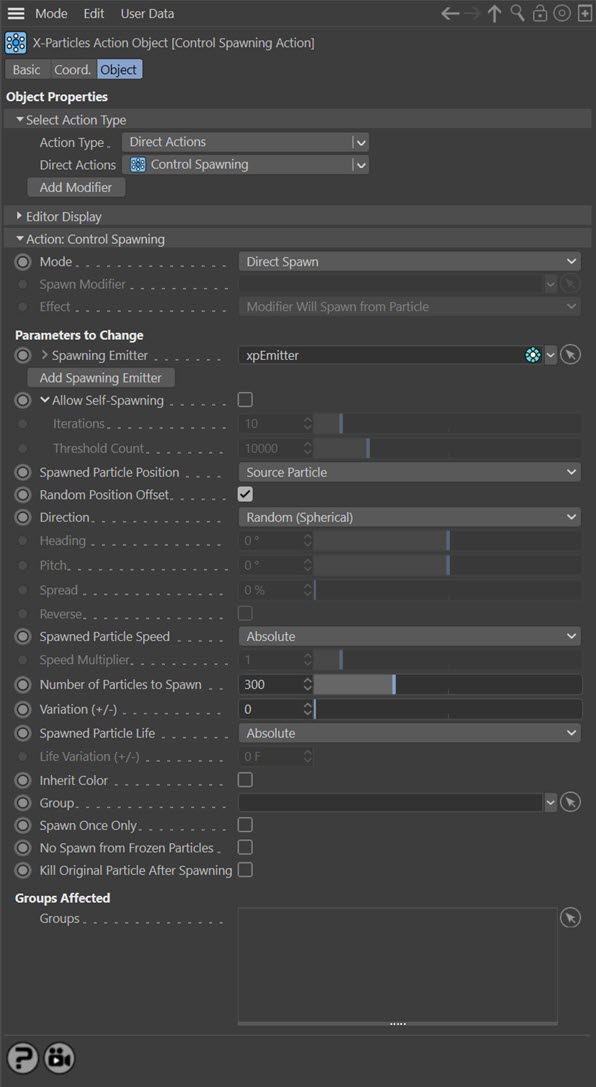 The Action will spawn new particles directly from a source particle. It does NOT require a Spawn modifier, but it does require that you specify a spawning emitter. This mode lets you spawn new particles at a precise point without having to work indirectly through a modifier, which can be a little convoluted for a simple operation.

In this case the Action will let you control the operation of a Spawn modifier in the scene.

This field accepts a Spawn modifier which you drag into the field from the Object Manager. Without a linked modifier, you cannot access any of the other parameters and the Action will have no effect. In addition, in the modifier's interface the Mode parameter MUST be set to 'Action-Controlled'. If it is set to 'Independent' the modifier will simply work on its own like any of the standard Cinema 4D modifiers and the Action will have no effect on it.

These are the parameters which can be changed in 'Direct Spawn' mode.

In Direct Spawn mode, an emitter must be dropped into this field. Particles will be spawned from this emitter.

Click this button to create a new emitter and add it to the 'Spawning Emitter' link field.

Normally, when you are spawning particles you must supply a second emitter which generates the spawns. Spawning from the same emitter is not recommended (and in previous versions was not possible) to avoid generating huge numbers of particles.

This is time-consuming and the object manager can quickly become confusing. This switch is designed to avoid that. If you check this switch, you don't need a new spawning emitter. Simply drag the same emitter which generates the source particles into the 'Spawning Emitter' link field.

Note that this will set the emitter to 'Controlled Only' emission, and you will have to set this back manually to another option, or no particles will be generated at all.

This lets you produce this kind of effect very easily, with only one emitter and one question/action:

Caution: used carelessly, this feature can generate enormous numbers of particles very quickly, and bring your computer to a halt! To avoid this, keep the 'Number of Particles to Spawn' setting very low initially, and gradually increase it and/or the 'Iterations' and 'Threshold Count' settings until you are sure that you will not be producing too many particles.

This is a safety setting, intended to restrict how many times self-spawning may occur. Once this value is reached, no more spawns will be generated. You can increase it once you are sure excess particles will not be generated.

This is a safety setting, which restricts the total number of particles generated. Once the threshold value is exceeded, no more spawning will take place.

Note that this is NOT a maximum particle count setting. If the value is set to the default of 10,000, and the current particle count is 9,990, spawning will still take place even though that may take the total particle count well over the threshold value. Only after that will no more spawning occur.