This modifier simulates the physical effects of passing through a medium such as water, air, etc., which exert a force (drag) which slows the particles down.

For explanatory notes on this modifier, please see 'How to use the Drag modifier' below. 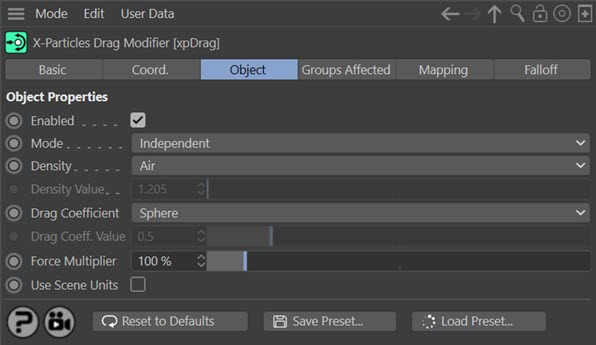 The density of the medium through which the particle is moving (see 'How to use the Drag modifier' below). Several density values are available from the drop-down, or you can select 'Custom' and enter a custom value into the 'Density Value' field.

The drag coefficient of the object (see 'How to use the Drag modifier' below). Several values are available from the drop-down, or you can select 'Custom' and enter a custom value into the 'Drag Coeff. Value' field.

There is a special coefficient value in the menu - 'xpShatter Fragments'. This is a value which after experimentation has been found to work well when using the xpShatter object. But you can use the 'Custom' option instead, and use your own value with xpShatter.

This setting is not physically accurate but lets you fine-tune the result of the modifier once you have set up the density and drag coefficient values. If the effect is not quite what you want, change this value to reduce or increase the force acting on the particle.

If this switch is unchecked (the default setting) the modifier assumes that the numeric values for particle radius and speed are in centimetres and converts them into meters for use in the calculation of drag. It does this regardless of the actual scene units. This ensures that the behaviour of the simulation is the same no matter what units are chosen.

In reality, a sphere with a radius of two feet moving through a fluid will behave very differently to one with a radius of two millimetres (larger objects are more affected by drag). If you really need to use the actual scene units, check this switch, which will convert the radius and speed in whatever units are used into meters - but the resulting effect may be radically different!

How to use the Drag modifier

The Drag modifier goes some way to providing a physically accurate effect of drag on a particle. Drag occurs when an object moves through a medium - which could be air or another gas, or some kind of liquid. Drag acts to slow the object down; "air resistance" is a common term used for the drag on an object moving through air.

Drag is influenced by a number of factors:

Using these values, a drag force in newtons is calculated. This force then acts to slow the particle. In the real world, objects with greater mass are affected less by drag than similar objects with less mass. This is also true for the Drag modifier: the speed reduction varies according to particle mass, so if your particles have different masses, the drag effect will vary. Note that a particle mass of 1 in this case is assumed to be equivalent to 1 gram.