This modifier changes particle color in a controlled fashion, that is, not just a simple color change but a graduated change over time. Various modes of operation are available.

This is the modifier's interface in the default mode: 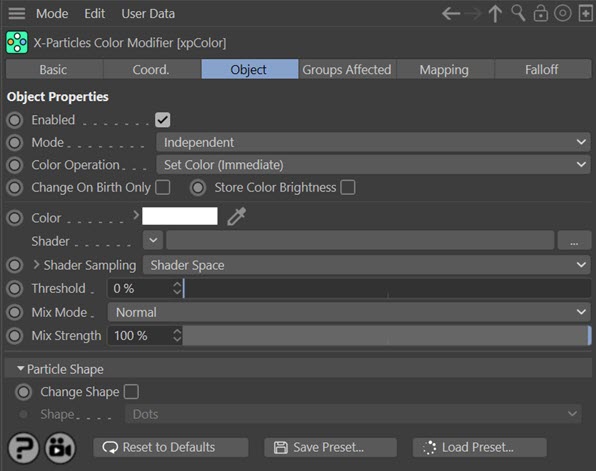 The modifier has several modes of operation, selectable from this drop-down:

In this mode, the color changes while the particle is in the modifier's falloff, but reverts to the original color as it passes out of the falloff zone.

This image shows the difference between the two modes, with Set Color on the left and Set By Falloff on the right:

This is similar to 'Set Color' but is simpler to use to get a smooth change in color. With 'Set Color' the only way to get a smooth change, as opposed to an abrupt one, is to use the modifier's falloff. This doesn't give precise control and is dependent on the particle's location within the field of effect. With 'Fade Between' you simply set the color to change to and adjust the 'Fade Value' to control the rate of change.

Note that the fade value is still dependent on the modifier falloff, and can be mapped as with other parameters.

Choosing this option will reveal these additional parameters:

Sets how often the color is changed if 'Operation' is set to 'Fade Between'. The default is 1 frame, so the particle color may change every frame.

This controls the rate at which the color changes if 'Operation' is set to 'Fade Between'. The higher the value the faster the change. A value of 100% will cause an immediate change (assuming there is no falloff) while a value of 0% will result in no color change at all. A value of 5%, for example, will take about 20 frames to complete the color change (100 / 5 = 20) but this is dependent on the modifier falloff, so may take a little longer if there is a falloff present.

This value can be mapped if desired to give even closer control.

These parameters are used in conjunction with the 'Increment/Decrement Color' mode. The maximum value is 255, which will cause an instant color change. A value of zero will result in no change. Values less than zero will reduce the color values for each component.

The modifier assigns a random color to each particle.

With this mode you can drag a texture tag into the 'Texture Tag' link field and the particle color will be sampled from the shader in that tag. The sampling will be done in one of two ways;

The sampled color will be blended with the color from the 'Color' setting, depending on the 'Mix Mode' and 'Mix Strength' settings.

Note: this will only work with channel shaders, not materials such as Hair, Nukei, etc.

The following settings are available:

Only available in 'Use Texture Tag' mode. Drag the tag to be sampled into this field. Note that the material must be a channel shader, not the Hair material, Nukei, etc.

Only available in 'Use Texture Tag' mode. This is the channel to sample from (Color, Luminance, etc.). The channel does not have to be used in the material. You can set up an unused channel and sample from that if desired.

If you select this option you can drag a vertex color tag into the link field which appears and the modifier will take the particle color from the tag.

In order to use this feature, you must:

In this mode the color modifier functions in the same way as if you had selected 'Gradient (Parameter)' from the 'Color Mode' drop-down menu in the emitter's 'Display' tab. The interface will change to look like this: 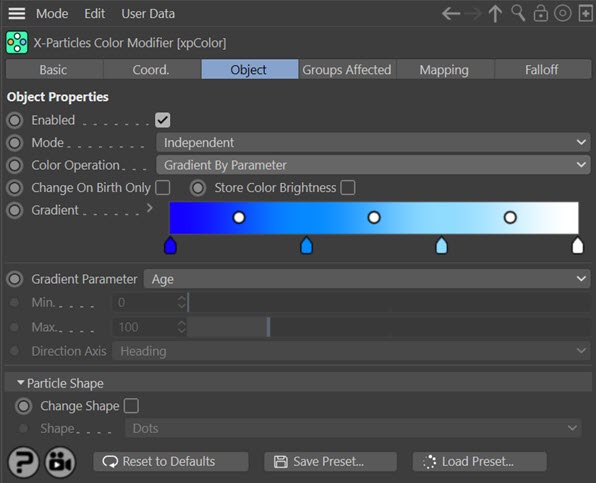 Note that unlike the emitter there is no 'Auto' switch, so you must enter the required range of values into the 'Min.' and 'Max.' settings. 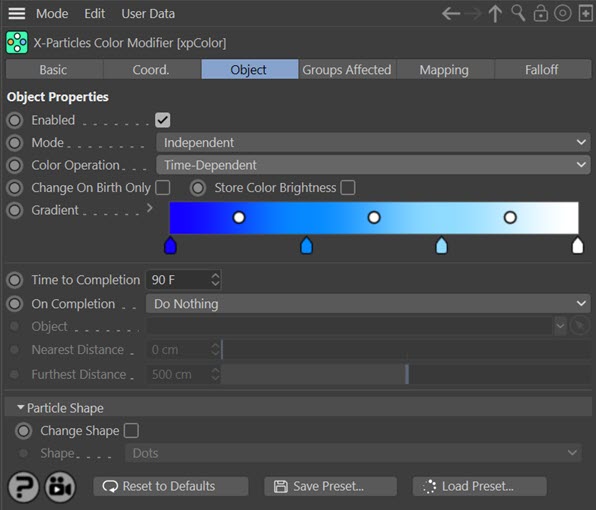 When the color change is complete, what the modifier does then is governed by the 'On Completion' parameter.

This is the same as for the 'Time-Dependent' mode but the rate of change is governed by the distance of the particle to an object in the scene. With this mode, two additional settings are available: 'Nearest Distance' and 'Furthest Distance'. All particles closer to the object than the nearest distance will have the color at the left of the gradient, while all particles farther away from the object than the furthest distance will have the right-hand gradient color. Particles with a distance from the object in between the two distance values will have a color somewhere along the length of the gradient.

Exactly the same as the 'Distance From Object' mode except that the current camera is used instead of a scene object.

Change on Birth Only

If this switch is checked, the color is only changed for newly-created particles. After that, the modifier will not affect the particle at all (and no other color modifier will do so either, if that switch is also checked in them). This has been added specifically to help this modifier work in conjunction with the Infectio modifier. See that modifier page for more details.

If this switch is checked, when the color is changed the overall brightness will be stored as a particle data item. This can then be used later elsewhere in X-Particles. Note that the stored brightness will continue to be updated as long as the modifier affects the particle, unless the 'Change on Birth Only' switch is also checked.

This has been added specifically to help this modifier work in conjunction with the Infectio modifier. See that modifier page for more details. You can also use data mapping with this value. It is in the list of maps as 'Color Modifier Brightness (Color Mod.)'.

Only available in 'Set Color', 'Set Color (Immediate)', 'Fade Between' and 'Set By Falloff' modes. It sets the particle color, in combination with color from a shader (if present).

If 'Operation' is set to 'Set Color (Immediate)', 'Set Color', 'Fade Between' or 'Set By Falloff' there is the option to use a shader to generate the color. In these modes, the following parameters become available:

To the left of the word 'Shader Sampling' is a little arrow. Click this to reveal the other parameters.

The shader sampling is a true 3D sampling for those shaders which support it. For example, here is a Box emitter with the particles colored by a Noise shader: 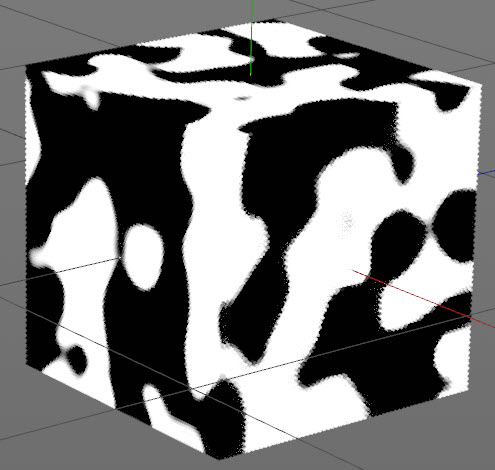 Although you cannot see from this image, the sampling is carried through the volume of the emitter.

Note that not all shaders will give a 3D sample of this kind. 'Noise', 'Rust' and 'Earth' will do so for example, but 'Brick', 'Simple Turbulence' and a number of others will not.

These settings become available if 'Operation' is set to 'Gradient By Parameter', 'Time Dependent', 'Distance From Object' or 'Distance From Camera'.

The color gradient used in the the gradient modes.

This drop-down menu is only used in the 'Gradient By Parameter' mode. The color change is dependent on one of several particle parameters. The parameters available are:

* Direction is an absolute value and there is no min/max setting possible with this. You can select the direction axis to test; this can be either Heading, Pitch or Bank. Particle direction is a vector, with three components to indicate the amount of movement along each axis. Each component can be between 0 and 1 and this is used as an index into the gradient to choose the color.
** Fluid Density will only work if the SPH Fluid object is active in the scene.
*** P-P Distance is the distance to the nearest particle from the one to be colored. It will only work if the 'Nearest Particle Data' switch has been checked in the emitter's 'Extended Data' tab so that the particle holds the distance to the nearest other particle.

If the option '3D Linear' is chosen, the following settings are revealed:

The lowest position along the axis.

The highest position along the axis.

This menu has two options:

The object used if 'Space' is set to 'Local'. If it is left empty, the world position is used instead.

These are the values which set the range for the parameter chosen in the 'Gradient Parameter' setting. These are not available for the 'Age' or 'Direction' parameters.

The axis to use when 'Gradient Parameter' is set to 'Direction'. The three options are Heading, Pitch, and Bank.

This parameter is only available if 'Operation' is set to 'Time-Dependent'. It governs what happens when the color change is completed. There are three options:

No further change to the particle color will occur.

The color will be changed back to the color at the left of the gradient and the process repeated.

The color change will be reversed: it will begin to change back to the color at the left of the gradient, taking the time in 'Time to Completion' to reverse the change.

The object to measure particle distance from if 'Operation' is set to 'Distance From Camera'.

A link field for a vertex color tag if you set 'Color Operation' to 'Use Vertex Color Tag' (Cinema 4D R18 or higher only).

This is a setting designed to introduce some random chance into the color change. Each time the color is due to change for a particle (see 'Change Every' above) a random number is generated; if that number exceeds the threshold, the change will take place, but if it does not there will be no change. You can see that a value of 0% will always result in a change occurring; a value of 100% will mean that a change never occurs.

This drop-down determines how the color from the 'Color' and 'Shader' fields are blended. The standard four blend options are available. The 'Mix Strength' parameter governs the relative contribution of each color to the final result. A value of 100% means that only the shader color is used, while 0% will only use the Color field color.

These parameters have no meaning if no shader is present in the 'Shader' field.

The Color modifier can also change the particle shape without changing the particle's group. The shape change will occur as soon as the particle enters the modifier's field of effect. It is not affected by any other parameter and is independent of the choice in 'Color Operation'.

If 'Change Shape' is enabled, this drop-down menu enables you to choose the new shape.