This modifier spins or rotates the particles.

Note that this modifier is not required if all you want to do is set a particle spinning. For this, it is much simpler to use the 'Simple Spin' settings in the emitter's Extended Data tab (General Data quicktab)

This modifier has two modes of operation:

In addition there are some parameters common to both modes.

Common to both modes

This modifier has two modes of operation. The default is 'Spin' and with this selected particles will be spun - that is, their rotation is not fixed but changes each frame. The other mode is 'Rotate' which as it name suggests does not spin a particle but rotates it to a specified value.

The modifier will rotate particles to a specific rotation, but does not spin them continuously. Different options are available in this mode (see below).

Parameters when Operation is set to Spin 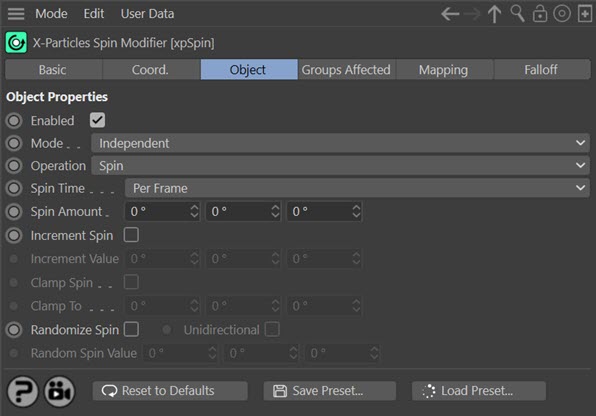 In this case the values given in 'Spin Amount' and other parameters are considered to be the value to spin the particle each second. In other words, if 'Spin Amount' is set to 60 degrees on each axis, and the frame rate is 30 frames per second, the particle will spin by 2 degrees (60/30 = 2) each frame.

This is the change to apply to the rotation of the object whose associated particle passes into the modifier’s field of effect. These values represent the change in rotation each frame, so in general should be kept quite small; 10 degrees per frame is quite fast. Negative values can be entered to spin the objects in the opposite direction. The full amount of spin is applied to particles passing through the modifier’s red zone; those in the yellow zone have their spin altered in a reduced amount, depending on the strength of the falloff.

This switch and the 'Increment Value' parameter can be used to increase the amount of spin as the particle passes through the modifier, making it spin faster and faster (or slower, if the increment is a negative value). Check this button to gain access to the increment value field and to increase the spin each frame.

If the 'Increment Spin' switch is checked, the particle spin will increase by the value in this field each frame. You can use this to speed up or slow down a particle spin, for example. The values you can enter are limited to 45 degrees as values higher than this can give rise to incorrect results, such as the particle appearing to spin slowly backwards instead of very fast forwards!

If you use a negative value in this setting, the particle spin will slow down but it will eventually reverse and spin the particle in the opposite direction.

Note: you should use very small values in this field! Typically values of 0.1 to 0.3 degrees give good results (negative values are allowed). If the value is too high, the change in spin will appear to be instantaneous (which might be what you want, of course).

If 'Clamp Spin' is checked, the amount of spin is limited to the value in 'Clamp To'.

To give a particle a random spin, check this box. The particle will then spin in either direction by a random value.

This option is only available if 'Randomise Spin' is selected. By default the object may spin in either direction, so some spin forwards and others backwards. If you only want the random spin to take place in one direction, check this switch. The spin can be reversed by using a negative value in 'Random Spin Value'.

Parameters when Operation is set to Rotate

Note: this mode does NOT require that 'Use Rotation' is enabled in the emitter. Unlike 'Spin' mode, this will work whether or not that option is checked.

In this mode these parameters are shown: 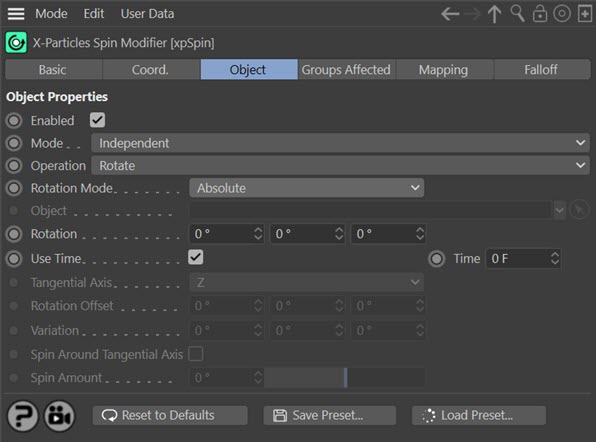 This drop-down has these options:

The particles will be rotated to the value in the 'Rotation' field.

The particles will be rotated to a value which is their current rotation plus the value from the 'Rotation' field.

The particles will be rotated so their Z-axis points to the current scene camera. As they move, the rotation will be updated so they always point at the camera.

The particles will be rotated so their Z-axis points to the object specified in the 'Object' field, if there is one. As they move, the rotation will be updated so they always point at the object.

The particles are rotated so that they always face the screen. This is not the same as 'Face Camera' since the particles will always appear face-on to the screen regardless of camera movement or rotation.

This option does the same thing as the 'Tangential' setting in the emitter's Extended Data tab - the particle is rotated to point along its direction of movement. Being in a modifier gives more control over when tangential rotation is used. You can also choose the axis along which to point in the 'Tangential Axis' parameter.

The object to point at, in 'Face Object' mode.

This switch is only available in 'Absolute' or 'Relative' modes. If checked, the change in rotation will take place over the time given in the 'Time' field.

This switch is only available in 'Absolute' or 'Relative' modes and when 'Use Time' is checked. It gives the amount of time taken to change the rotation. A value of zero will cause the change to take place immediately (just as if 'Use Time' was unchecked).

The rotation value used in 'Absolute' or 'Relative' modes.

This parameter is only available if 'Rotation Mode' is set to 'Tangential'. By default, with tangential rotation the Z-axis of the particle points along the direction of movement. If you use the emitter to set tangential rotation, the Z-axis is used by default - although the X or Y-axis can be used instead. This setting in the Spin modifier will override the emitter option. With this parameter you can choose which axis to point along the movement of the particle. The options are either X, Y or Z, with 'Z' as the default axis.

For more details on the use of this parameter, see the article 'The importance of Tangential Axis'.

This parameter is only available if 'Rotation Mode' is set to 'Tangential'. It can be used to give additional rotation on any axis to a particle (and any generated object associated with it) which has been rotated to point along the direction of travel.

This example shows how this can be used. In the first image, the particle rotation is set to Tangential in the modifier, with the 'Tangential Axis' set to 'Y': 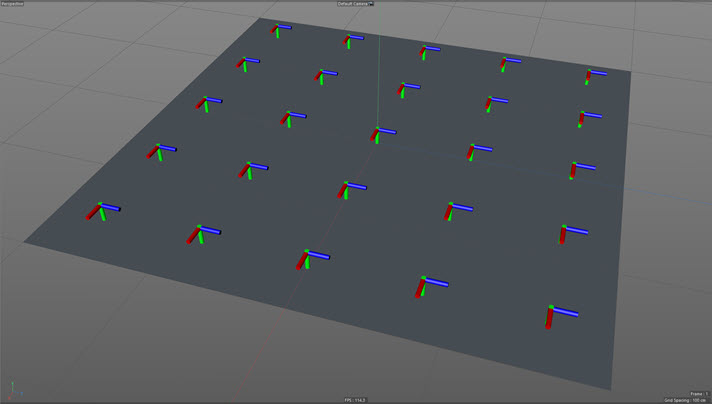 As you can see, they all look the same. If we set 'Rotation Offset' to 30 degrees (in the X component) we see this: 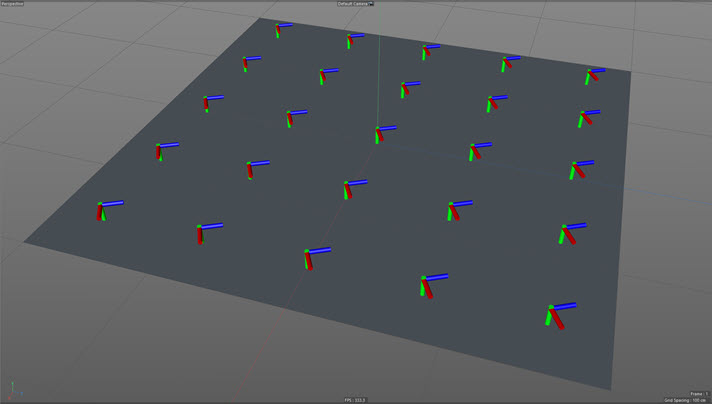 Now they are all rotated through 30 degrees on their Y axis. We can add some variation into this by increasing the X component in the 'Variation' setting, in this case also to 30 degrees: 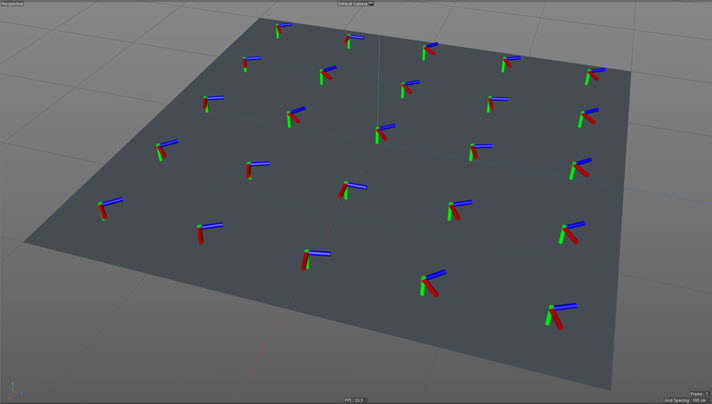 Now they all have a different rotation. This offset rotation is maintained even if the particles move and their direction changes (which also rotates the particles to point along the new direction).

This is used to add variation to the 'Rotation Offset' setting, as described above.

This parameter is only available if 'Rotation Mode' is set to 'Tangential'. Normally, a particle set to tangential rotation cannot also spin. But if this setting is enable, you can spin the particle around the tangential axis.

Only available if 'Spin Around Tangential Axis' is checked. It is the number of degrees to rotate the particle around the tangential axis in each frame.