This modifier enables particles to move along the path of a spline, but with less rigidity than the Follow Spline modifier, and is more suited to fluid simulations.

Before using this modifier for the first time, please see the section 'Using the Spline Flow modifier' below. 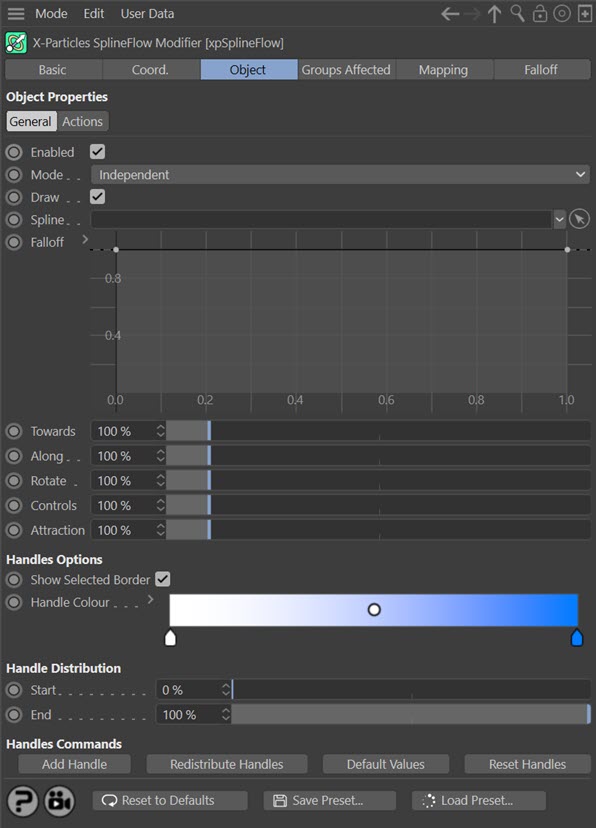 This switch controls the drawing of the handles. Uncheck it to turn off their screen display; this does not remove any effect of the handle, it only affects the screen appearance. It is not possible to draw or not draw handles individually, only all or none.

Drag a spline object into this link field. Particles will then move around the spline, controlled by the parameters in the handles.

Towards, Along, Rotate, Controls and Attraction

Each handle possesses an equivalent property to these settings. In the modifier, these values act as a multiplier for all the handles. They are all initially set at 100%, which means that the Towards, Along, etc. properties are managed entirely by the handles themselves. If you set the 'Towards' value in the modifier to 200%, for example, you would be doubling the equivalent value from each handle.

These values (with the exception of 'Attraction' can all be used for data mapping.

If this switch is checked, when a handle object is selected in the object manager, it will turn orange and will be drawn with a square orange border. If you prefer not to see a border around selected handles, uncheck this switch.

This gradient assigns a colour to each handle object depending on its 'Position' setting. The position ranges from 0% to 100% and is the distance of the handle along the spline. A handle with position 0% is drawn in the colour from the left of the gradient, while one with a position of 100% is drawn with the colour at the right of the gradient.

Click this button to add another handle object. This new handle will always be positioned at 50% along the spline.

This button will reset all handles to their default values except their position. No handles are deleted.

If you click this button, and confirm you want to do this in the question box which appears, all the current handle objects will be deleted and the five default handles generated instead. None of the parameters in the modifier itself will be changed, however. 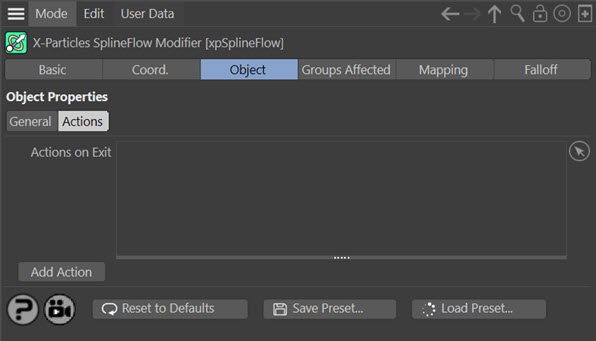 You can drag any Action, or multiple Actions, into the Action list. These Actions will be carried out when a particle has passed through the final active handle.

This modifier moves particles along a spline but in a much more fluid-like way than the Follow Spline modifier. Particles are drawn along the spline by a series of 'handles' which exert various forces on them. Handles may pull the particles towards themselves, increase the speed of movement along the spline, rotate them around the spline, etc.

Particles will continue to move along the spline as long as there is another active handle for them to move to. If a handle is inactive (i.e. shows a red cross against its name in the object manager) the particles will not be drawn to it but may continue to be drawn to subsequent handles.

When this modifier is created, it will automatically create five handles which are separate objects in the object manager. These are all child objects of the Spline Flow modifier. You can delete them but do not move them away from their parent object, as then they will have no effect.

You will not see the handles until a spline is added to the 'Spline' link field of the modifier. Then they will appear as circles drawn around the spline like so: 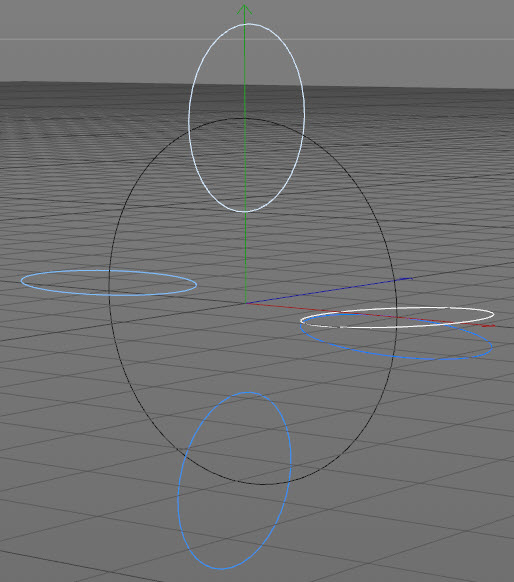 Note that handles are coloured depending on their position around the spline. These colours are controlled by the 'Handle Colour' gradient.

For more details on the handles themselves, see the Spline Flow Handle page.