Important: if the emitter is emitting one or more groups, these settings will be ignored by any groups which control the parameters listed below, since then these settings are taken from the particle's group.

In this quicktab you can set various 'physical' properties of the particles. These are used in the FLIP system for smoke, fire, etc. Particle mass is also used in other areas such as the Drag modifier. 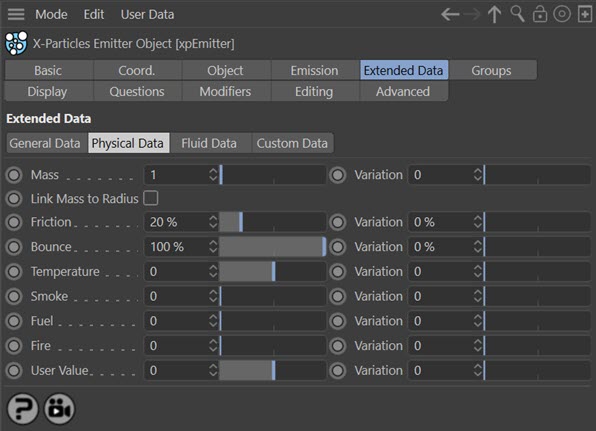 The following settings can be changed, with variation between particles if required:

The particle's mass. These are not real-world values (i.e. a value of '1' must not be taken to mean 1 gram, or 1 pound, etc.). You can add variation to the mass with the 'Variation' setting.

If you turn on this switch, the mass of the particle is linked to its radius, so that larger particles have greater mass. In X-Particles both mass and radius can be set but if either have any variation included, it is not the case that the largest particles have the greatest mass. That is what this switch does: it maps the mass to the radius.

In X-Particles 3.5 objects were given friction and bounciness in the collider tag, but the particles themselves had no such property (effectively making them fully 'bouncy' and totally frictionless). By giving the particles their own properties, interaction with object surfaces is improved as is particle-particle collision (using the Constraints object collision section).

With friction, both the particle and the surface must have friction greater than zero for any friction effect to occur.

Here 'Friction' is zero and the friction setting in the collider tag is also zero, so the particles slide freely off the plane object:

In this video, the 'Friction' setting in the emitter is set to 100% and in the tag to 5% (you would see exactly the same result if the emitter was set to 5% and the friction setting in the collider tag was at 100%) and the particles are slowed considerably:

Finally, the situation is reversed with the tag friction set to 100% and the emitter to 20%:

These values are all used in the ExplosiaFX object when generating fire and smoke. For further details, please see the following pages:

This is a value you can set to anything you like. It can be changed with the Physical modifier or Xpresso, but X-Particles itself will not change it during the course of any simulation.