This article explains how to use the curl mode in the Branching modifier most effectively, so you understand what each parameter does and why.

We'll start with a very simple scene: an emitter generating one particle moving along the positive Y axis. The branch modifier in the scene is set to generate just one branch and to avoid confusion the branch deviation settings have been set to zero. The sub-branch object is set to use curl mode with the default settings.

This is what you see (we're only interested in the shape of the curl): 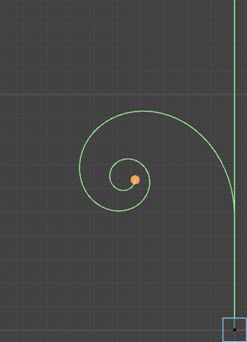 Let's look at the effect of these settings on the generated curl.

This image shows the effect of the curl angle of 2, 5, and 10 degrees:

Clearly, increasing the curl angle results in a tighter curl, while reducing it opens the curl out.

As the curl spiral becomes tighter and tighter, if the particle moved at the same constant speed the effect of the spiral would be greatly reduced. To prevent this the particle speed is reduced by a percentage value each frame. Compare a speed reduction of (from left to right) 0%, 2% (the default) and 5%:

As you see, you need some speed reduction for an attractive spiral but if it is too high the particle may slow so much that it doesn't produce much spiral at all. Which may, of course, be exactly what you want.

Rather than altering each value individually, you can also simply alter the curl effect by using the Strength setting. Set to zero, this will result in no curling effect.

Each of these values (curl angle, tightening, speed reduction and strength) also has an associated control spline. By adjusting these splines you can change how the value varies over the length of the branch.

For example. in this image tightening is set to 0.5 degrees. The default spline (which has no effect on the value) is on the left, in the centre the spline increases the value from zero to maximum over the length of the branch, and on the right it is reversed, decreasing from maximum to zero:

The above images all show the curl winding anti-clockwise. But what if you want it to wind clockwise instead? All you need to do is set the curl angle and tightening to negative values, then you will see the same curl but on the opposite side.

What happens if you set the curl angle to a positive value and tightening to negative, or vice-versa? Some interesting results can be obtained, for example, with a curl angle of 5 degrees and a tightening of -0.3 degrees: 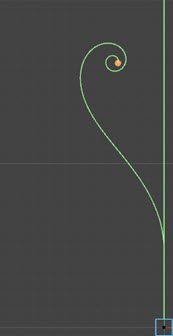 You can have symmetrical curls in the same way as any other branches. Using the same settings as in the above image, but with the symmetrical switch enabled: 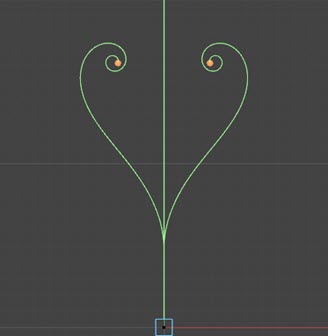 Note that if the symmetrical switch is enabled, the state of the fixed plane switch (see below) is ignored, since symmetrical branches must always work in a fixed plane.

The settings described above are all quite straightforward, but for full use you need to understand the curl plane settings.

What is the curl plane?

This is the 2D plane in which the curl takes place. For example, going to back to our basic setup but switching to the Top viewport, we see this, showing that the curl occurs in one 2D plane:

This switch is enabled by default and will force the modifier to use the plane angle. It is recommended that you leave this switch enabled. If you turn it off, you may get some interesting results but you may find that they are undesirable, because the plane will then be governed by the initial direction of the particle, and the curl will vary depending on the initial direction.

The above image simply shows that the branch lies in one plane. As you can see, in this case the branch is created along the negative X-axis, but it doesn't have to be. The plane it lies in can be changed with the plane angle and is also dependent on the plane of the parent branch. So here, the plane angle is set to 135 degrees: 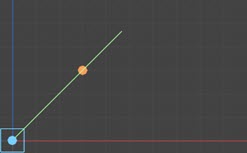 The curl still lies in one plane, but now it is a different plane due to the altered plane angle. You can change the angle to anything you like, and can introduce some variation between branches with the variation setting.

You can keyframe this setting to make the curl branches emerge from their parent in a spiral. This simple animation shows branching every 10 frames with the plane angle keyframed from 0 to 360 degrees over the scene length:

Note that the branch rotation settings are ignored if the mode is set to curl. If you want to rotate the branches around their stem in curl mode, change the plane angle over time.

The result of an animation like this depends on whether the fixed plane switch is checked or not.

You can see that the curl is definitely not all in the same plane. Results like this may be very desirable, depending on what you are trying to do, but it is recommended that initially you leave fixed plane enabled until you are confident about what will happen if you turn it off.

The same scene from the animation above, but with fixed plane turned off, looks like this:

This looks rather unattractive, although it actually looks much better in the perspective view rather than the top view. But it does demonstrate that using a fixed plane is usually very desirable.

As mentioned above, this switch is ignored if the symmetrical switch in the branch modifier has been turned on. Symmetrical branches must operate in a fixed plane in order to remain symmetrical, so in this case the state of this switch has no effect (it is assumed to be turned on).

There are some simple guidelines for using curl mode that we can produce from the above discussion. They are as follows: