There are a number of global preferences which can be found in the main Cinema 4D Preferences box. These are the X-Particles preferences: 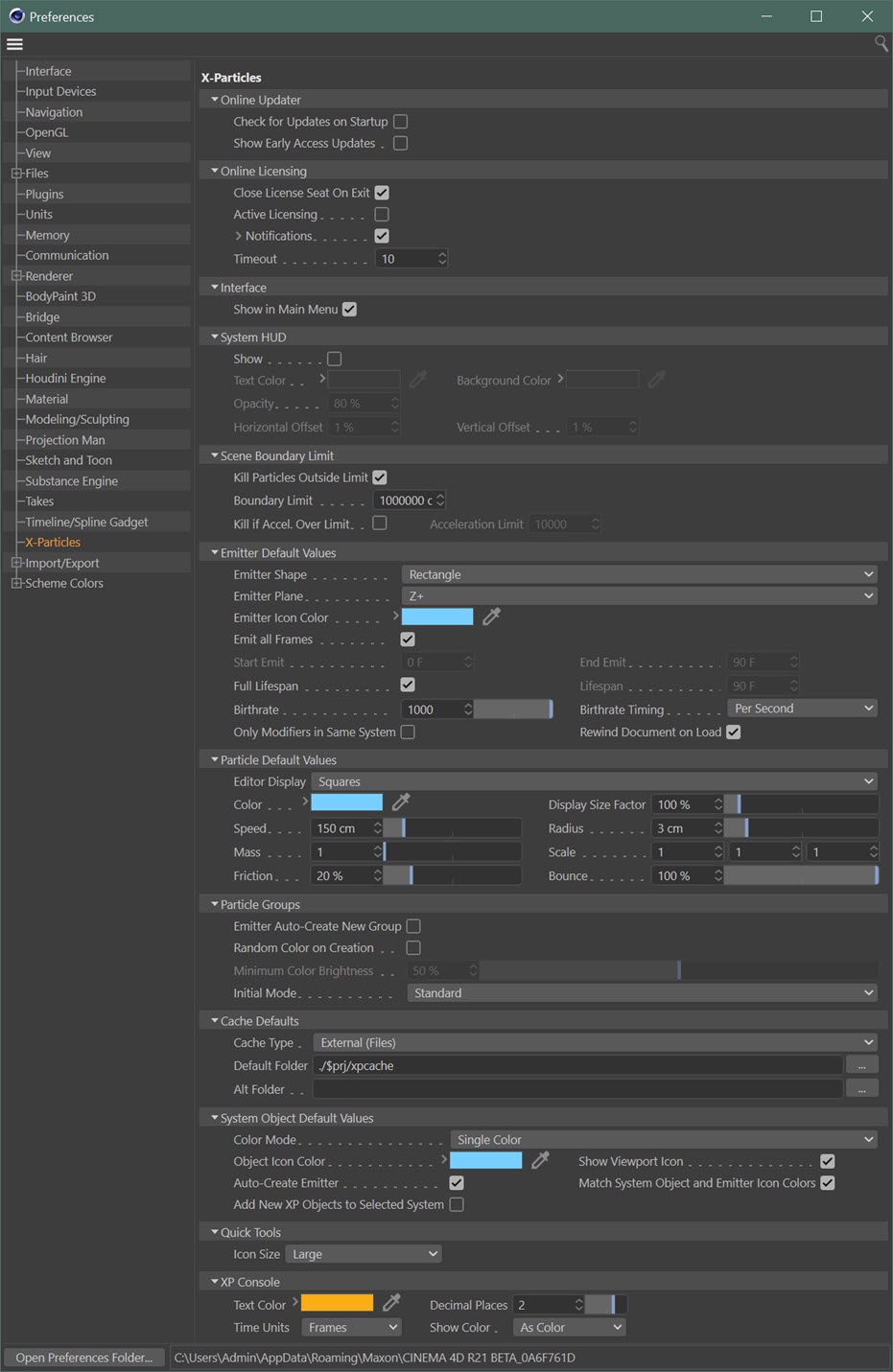 Check for Updates on Startup

X-Particles can check for updates to the plugin and documentation each time it is started. If you don't want it to do this, uncheck this switch.

If you check this switch, you will also be shown any updates available through the Early Access program. Note that any such updates are considered BETA versions and as such may not be production-ready. Only download such updates if you accept the risk that they may be less stable than the release version and that new features are subject to change.

This switch is not available for subscription licences for X-Particles.

If this switch is checked, then when Cinema 4D exits the licence seat is closed. This allows you to use X-Particles on another machine, but that machine can only remain offline for two days. After that, it must reconnect to the licence server to revalidate the licence.

If it is unchecked, the licence seat is NOT closed when Cinema 4D exits. This will allow you to continue to use X-Particles for up to 14 days offline before needing to revalidate the licence, but of course during that time, X-Particles can only be used on the machine with the open licence.

The default setting is that this switch is checked and it is recommended that you don't change this, unless (for example) you need a longer offline period, such as when travelling.

Suppose you use X-Particles at work and later at home, but you only have one licence. Previously, you would close the licence on one machine (by closing Cinema 4D) then reopen it on the other machine. If this option is enabled on both machines then when Cinema 4D is run on the second machine the open X-Particles licence on the first machine will be closed automatically and opened on the second machine, without needing any action by you. The same would be true in reverse if you then run Cinema 4D on your office machine the next day.

When X-Particles attempts to connect to our server on startup, it will do so for the length of time (in seconds) given in this setting. If you find this results in a slight delay when Cinema starts up, you can reduce this value.

Each Emitter can display its own HUD, but if you have multiple emitters this can be inconvenient. Instead (or in addition) there is a scene-wide HUD which simply displays the total number of emitters and the total live particle count in the scene.

If checked, shows the HUD in the editor.

These settings allow you to change the colours used in the HUD and its opacity.

These settings give the location of the HUD on the screen, expressed as percentages of the screen width and height. You can change these to alter the HUD location. (Unlike the Cinema 4D HUD, you can't drag the HUD around the screen.)

Sometimes particles can get out of hand and move extremely fast, or move a very long distance away. This can cause problems with features such as the Skinner or Fluids. You can kill these particles if they exceed certain set limits.

If the particle is farther from the world centre by more than the value in 'Boundary Limit', they will be killed.

The distance limit from the origin (world centre).

Kill if Accel. Over Limit

If the particle's acceleration is higher than the value in Acceleration Limit, it will be killed.

The maximum acceleration the particle is permitted.

These are a set of default values for the emitter (as opposed to particles).

The shape of the emitter when first created. This corresponds to the shape settings in the emitter; possible choices are Rectangle, Circle, Ellipse or Sphere.

The plane the emitter lies on when first created. Possible choices are the X+, X-, Y+, Y-, Z+ and Z- planes.

The default colour for the emitter icon in the viewport.

If this switch is checked and the scene file contains an emitter, the document will be automatically rewound when it is loaded, abolishing the time required to generate particles. It is recommended that you leave this switch checked. If you really don't want the rewind to happen, uncheck this switch.

Note: rewinding will only occur if there is an emitter in the scene. If there is no emitter, the switch will have no effect.

These are the default values which are set in the Emitter when it is created or in a newly-created Group object. Note that, in the case of Groups, these settings are overridden if the Group is created by an Emitter and the switch 'Use Current Display Settings' is checked.

The shape of the particle in the editor viewport.

The default values for these six parameters.

These settings affect the creation of new Groups.

If this switch is checked, then when a new Emitter is created it will automatically create a new Group and assign that Group to itself.

If a random colour is created for the new Group, it will never be below this brightness value. This prevents excessively dark colours from being generated.

A Group object can be set to three possible modes - please see the Group object for details. This drop-down allows you to choose which mode new Groups are created with. The options are the same as the Group object 'Mode' setting. The default value is 'Display Only'.

These are the default settings for the cache type and cache folder. See the Cache object for more details about these options.

The cache type, either external to separate files, or internally to memory.

The default cache folder that will be used unless the user selects a different folder in the cache object.

The default alternative folder, which will be used unless a different folder is selected in the cache object.

These are default values for the System object.

All new System objects will be created using the colour from the 'Object Icon Color' setting.

Each new System object will be given a randomly-generated colour.

The colour for the new System object if 'Color Mode' is set to 'Single Color'.

You can turn the system object screen icon off in the System Object itself, but to turn the icon off for all new system objects, uncheck this switch.

If checked, when a new System object is created, a new emitter will be created as well.

Only available if 'Auto-Create Emitter' is checked. If so, and if this switch is checked, the emitter icon colour will be the same as the System object colour.

Note that the colour matching only applies to newly-created System objects. If you change the colour of the System object after it has been created the emitter icon colour will not be changed.

Note that this only applies to objects which appear in the object manager, not to tags, materials, etc.

This is the size used for the icons in the Quick Tools dialog box. If you change the size, you will need to close and reopen the dialog to see the change.

The number of decimal places to show in the data grid for each item. The Cinema 4D default value is three, but this is often unnecessary. You can change this to between zero and three (Cinema 4D cannot show more than three decimal places).

For 'Age' and 'Lifespan' data items, the result can be displayed either as frames or seconds. You can change between them by using this menu.

This drop-down menu is used to control how particle colours are shown in the data grid. There are several options; see the XP Console page for details.

If you want to return the preferences to the factory state, you will have to reset them manually. This table gives the factory settings: