This modifier enables you to blend certain types of data between a particle and its adjacent particles, if any. The particles can be from different emitters. 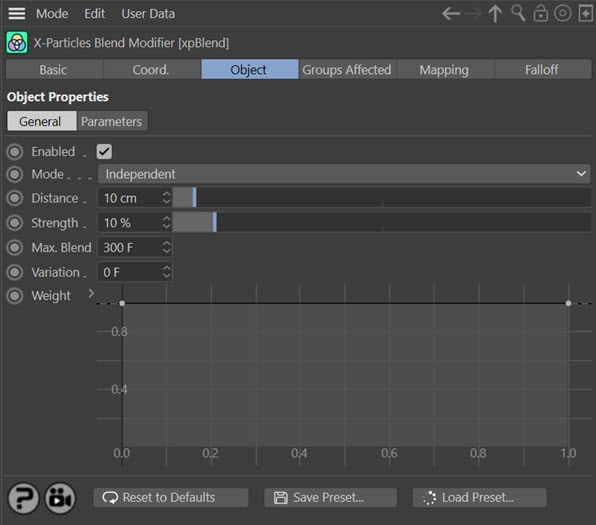 Particles must be less than this distance apart for any blending to take place. In conjunction with the 'Weight' spline, this setting also affects the strength of the blending.

The strength of the blending - that is, the degree of blending from one particle to another. If it is zero, the particle affected by the modifier will remain unchanged. If it is 100%, the relevant data in the affected particle will be fully changed to that of the neighbouring particle(s). Intermediate values lead to a blend between the values of the particles.

This is the time over which blending occurs. Depending on the 'Strength', 'Multiplier' and 'Weight' settings, the change of data values from one particle to another may or may not be complete when this time is up. All the setting does is specify the length of time for which the modifier will affect a particle.

You can add variation to the 'Max. Blend' parameter with this setting.

This spline enables you to alter the strength of the blend by the distance between the particles.

The purpose of this is so you can change the strength according to distance. The default spline has no effect since it always returns a value of 1. But suppose you would like a high blend strength when particles are close together but smaller when they are farther apart. In that case you would set the spline like so:

Particles which are farther apart will read a value towards the right-hand side of the spline, which in this case will give a lower blend strength.

These are the parameters you want to blend. You can select more than one parameter if required.