This modifier causes particles to 'explode' away from their current position. 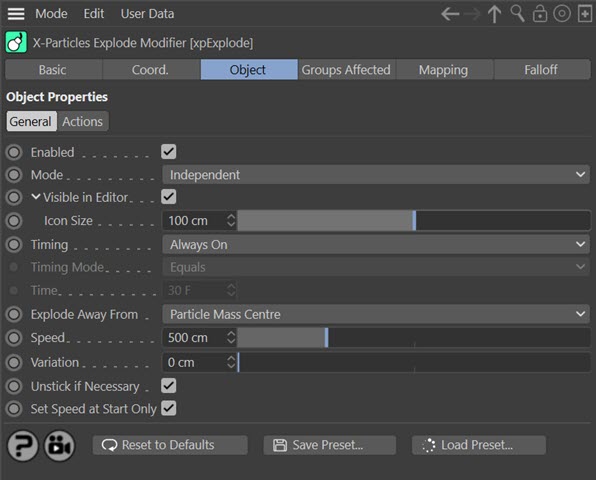 The on-screen representation of this modifier looks like this: 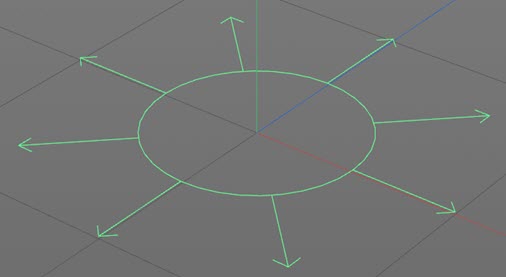 The Explode modifier has its own representation in the editor. If you don't want to see that, but still want the modifier to be active, uncheck this switch.

This is accessed by clicking the small arrow to the left of the 'Visible in Editor' label. You can use it to adjust the size of the viewport icon.

With this menu, you can instruct the modifier to explode the particles at a chosen time. In previous versions, to achieve this it was necessary to set the modifier into action-controlled mode then use a question and/or action to activate the modifier.

There are three options:

This is the default mode and in this case the modifier will behave exactly as in previous versions.

This is the same as 'Trigger at Scene Time' but instead of the scene time compares the particle age to the 'Time' parameter.

This menu determines when the particles will explode in relation to the 'Time' setting. The options are:

Particles will explode when the scene time or particle age is equal to the 'Time' setting. With this setting, the explosion will only happen once, when the times are equal.

Equals or Greater Than

Particles will explode when the scene time or particle age is equal to or greater than the 'Time' setting. This means that, if 'Timing' is set to 'Trigger at Scene Time' once the modifier is activated it will be active for the rest of the scene.

Equals or Less Than

Particles will explode when the scene time or particle age is equal to or less than the 'Time' setting. This means that, if 'Timing' is set to 'Trigger at Scene Time' the modifier is activated from the start of the scene but will cease to be active once the time is exceeded.

The time to use when 'Timing' is set to 'Trigger at Scene Time' or 'Trigger at Particle Age'.

With this option, a particle which is affected by the modifier will then explode away from the position of the modifier itself. This is useful if you are animating the modifier and it has a falloff other than infinite, since the particles can then be stripped away from an object by moving the modifier over that object.

This is the speed with which the particles will move when they explode. You can add some random variation to this with the 'Variation' setting.

If a particle is stuck to an object, for example by a Cover/Target modifier or by sticking the particle to an object at emission, the particle must be unstuck for this modifier to work. This will be done automatically if this switch is checked. Otherwise you will have to use an Action to unstick the particle first.

Set Speed at Start Only 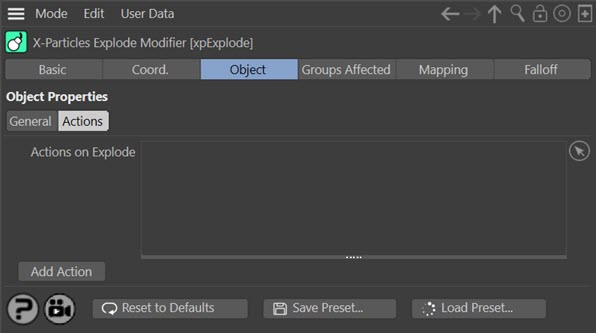 Actions dragged into this list will be executed when any particle is 'exploded' by the modifier.