This action does nothing except output some information to the Cinema 4D console. The purpose is to aid in determining when certain events occur during playback.

Please see 'Using the Output to Console Action' below for an example of how to use this action. 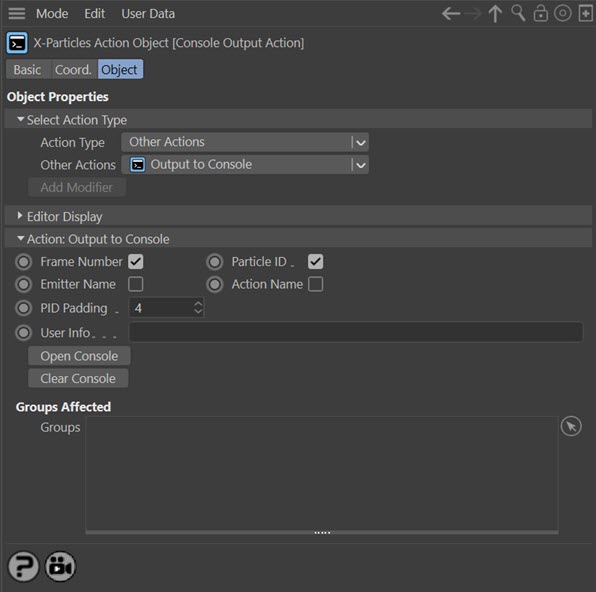 Check this switch to output the frame number on which the action is triggered.

Check this switch to output the ID number of the particle which triggered the action.

Check this switch to output the name of the emitter which emitted the triggering particle (useful if you have more than one emitter and want to know which one triggered the action).

Check this switch to output the name of the action (useful if you have more than one of these actions in the scene).

You can enter any text you like into this string field. See below for an example of how this field could be used.

Click this button to clear the console (note: no warning is given before the console is cleared).

Drag the particle Group object(s) you want to be affected by the action into the 'Groups Affected' list. If the list contains at least one group, groups not in the list will not be affected. But if no groups are in the list, all groups are affected.

Using the Output to Console Action

If you're trying to determine why something isn't quite working in a scene, then you may have done something such as add an action to be triggered when some event takes place. For example, you might have a particle change colour when the event occurs. That's fine but it only works once because if the event occurs again, you won't see any further colour change.

This action outputs information to the C4D console when it is triggered. You can use it to see which particle triggered the action and when. For example, suppose you have collisions taking place with a scene object. You would like to know when these occur and if they occur more than once.

To do this, add the action to the 'Actions' list in a Collider tag, then give the action a name to distinguish it easily from other actions. So, you could rename the action to 'Collided' and set its user interface to this: 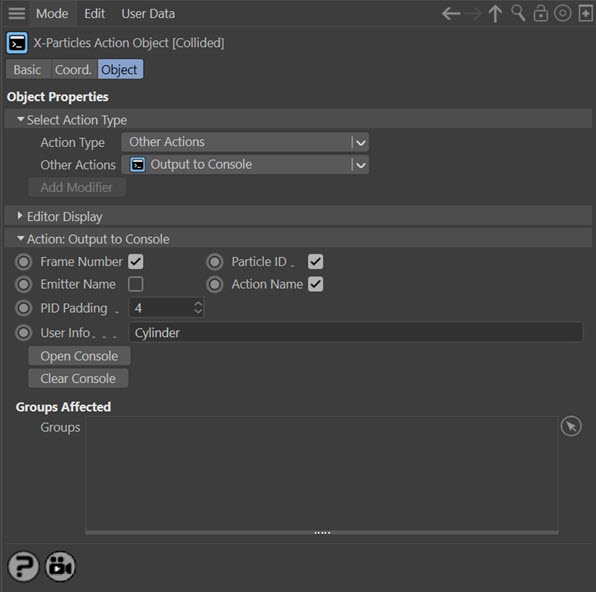 Note that the name of the object the collider tag is attached to has been added to the 'User Info' field (this must be done manually if you need this data). The result in the console looks like this: 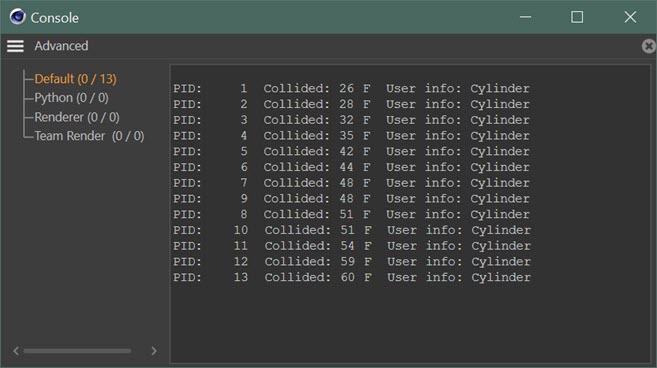 You have the particle ID number, the name of action that was triggered, the frame on which that happened, and the object that was collided with.

This action can be used in any X-Particles Question object and anywhere else where an action can be triggered, such as many of the modifiers.