The xpJoin object is a variant of Cinema 4D's Connect object, optimised to work with X-Particles. It takes a list of input objects and joins them into one object that can be used in an emitter or other areas where you need to use a single object, such as collisions, or in the Vertex Map Maker object.

This is very simple: either drag the objects to be joined into the 'Objects' list, or make them child objects of the Join object, or a mixture of both. 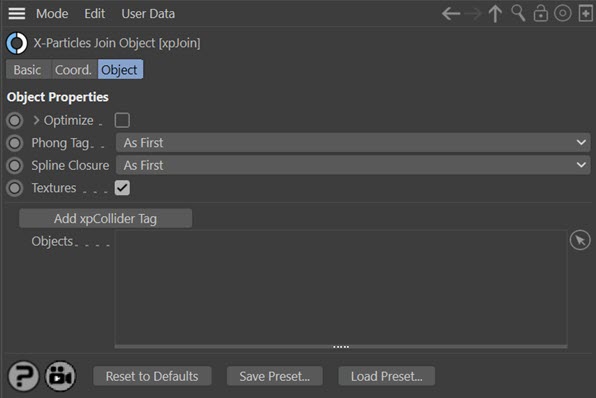 If this switch is checked, the generated object will be optimized using the same algorithm as the Cinema 4D 'Optimize' command. If you click the little arrow next to the switch, you will see additional controls for the optimization process. These are exactly the same as the controls in Cinema 4D's Optimize dialog box; please refer to the Cinema 4D documentation for details.

Click the arrow next to the 'Optimize' label to see additional options:

These are exactly the same as the controls in Cinema 4D's Optimize dialog box; please refer to the Cinema 4D documentation for details.

The Joiner can add a phong tag to the generated object if desired. The options in this menu are:

This is identical to 'As First' except the tag from the last object in the list is used.

With this option broken phong edges will be used.

This option makes the three standard settings for a phong tag available so that you can add a tag with the customised settings:

These are exactly the same as the settings in Cinema 4D for the phong tag. Please refer to the Cinema 4D documentation for details.

If the Joiner joins two splines together, the result is a single spline with two segments. These segments can either be closed or open, and this menu enables you to choose which setting to use; this is used for all segments in the new spline.

All the segments are closed.

All the segments are open.

If the first spline in the object list is open, all the segments in the joined spline will be open; if it is closed, all segments will be closed.

Exactly the same as 'As First' except that the state of the last spline in the list is used instead.

If checked, the joined object will keep the textures applied to each of the objects which were joined together. If unchecked the joined object can have its own texture by applying a texture to the Join object.

Clicking this button will add an xpCollider tag to the Join object. This is a convenience function and you can add a collider tag manually if you prefer.

The objects to be joined can be dragged into this list. Alternatively, they can be made child objects of the Joiner object. This is for the most part a matter of personal preference.

You can add any objects here, including polygon objects, splines, and generators such as the Mograph Cloner. As with the C4D Connect object, only the same kinds of objects can be joined. That is, you cannot join a spline to a polygon object. But if you have multiple spline and polygon objects in the same Join object, the end result will be a single polygon object plus a single spline object. However, you won't be able to use the Join object to emit from those different objects at the same time. The polygon object will always take precedence in such cases.

If you drag objects into this list as opposed to making them child objects of the Join object, you can also remove them temporarily by clicking the green tick icon so it becomes a red cross. This won't remove the object from the scene but it will no longer be included in the final joined object. In this example, the sphere will not be included in the joined object but the cube will. If you then emit from the the Join object emission would only occur from the cube.