This modifier pushes particles away from one another. Effects such as this are possible: 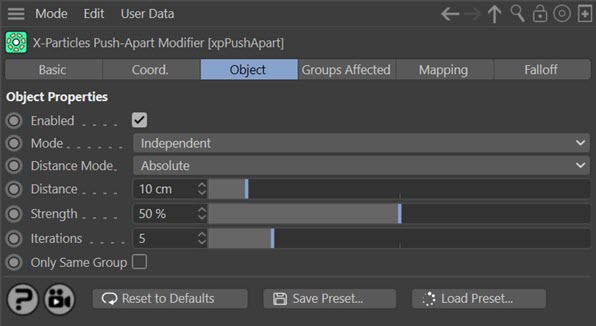 The distance is a set value. This is useful if you want to space the particles at more precise intervals. However, if the particle radius varies you may see some areas where the particles overlap and others with larger gaps between them than expected.

Here, the distance is taken from the particle radius. If the particles all have the same radius they will be spaced evenly apart. With varying radii, there will not be overlaps but in areas where large particles are adjacent to small ones you may see gaps between them.

Only available if 'Distance Mode' is set to 'Absolute'. It is the distance to push the particles away from one another.

Each frame, the modifier iterates through all the particles, attempting to move them apart by the correct distance. It requires at least two iterations each frame to do this but you can increase the number of iterations in this setting (the default is 5).

By doing so you may improve the accuracy of the simulation, but it will also slow it down since there are more calculations to carry out each frame. In general the default value will be fine in most scenes.

Regardless of how many groups there are affected by the modifier, if this switch is checked each particle will only be pushed away from particles in the same group.