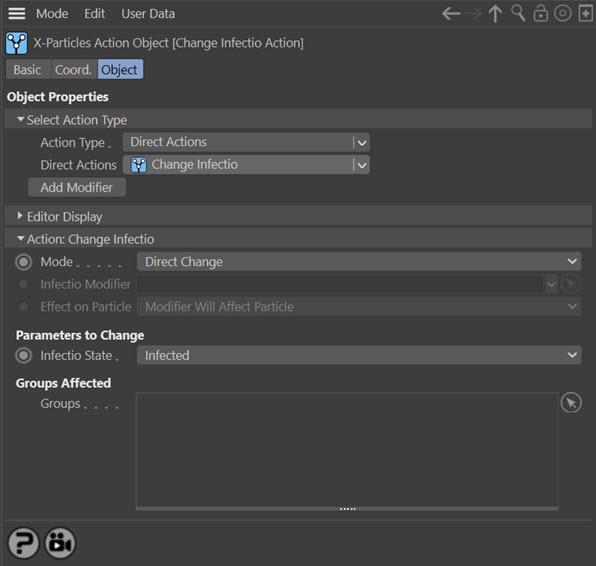 In this case the Action will let you control the operation of an Infectio modifier in the scene.

This field accepts an Infectio modifier which you drag into the field from the Object Manager. Without a linked modifier, you cannot access any of the other parameters and the Action will have no effect. In addition, in the modifier's interface the Mode parameter MUST be set to 'Action-controlled'. If it is set to 'Independent' the modifier will simply work on its own like any of the standard Cinema 4D modifiers and the Action will have no effect on it.

The only parameter which you can change in direct change mode is the Infectio state. You can set the state to one of three options:

This will change a particle's state to not infected. If it was already in that state, this option has no effect.

This will change a particle's state to Incubating. If it was already in that state, this option has no effect.

This will change a particle's state to Infected. If it was already in that state, this option has no effect. This is the default setting and is the most useful one, since you can use it to make a particle into a seed particle, which will then start to infect other particles.